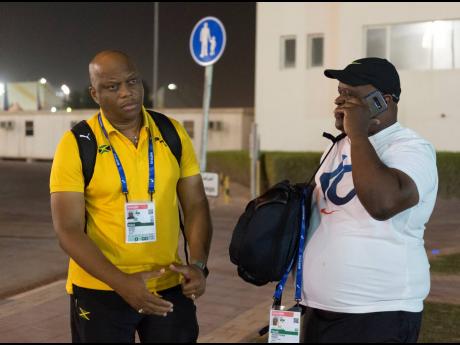 Head coach of Jamaica’s team at the 2019 IAAF World Championships in Doha, Qatar, Maurice Wilson, praised history-setting long jump gold medallist Tajay Gayle on his performance and says the win has set the tone for the rest of the athletes here.

Gayle broke James Beckford’s 22-year long jump national record of 8.62m with a 8.69m effort inside the Khalifa International Stadium, to win a surprise first gold medal for Jamaica in the event.

American Jeff Henderson was second in 8.39m with pre-meet favourite Juan Miguel Echevarria from Cuba relegated to third place with a best of 8.34m.

Wilson credited Gayle’s coach Stephen Francis, and says he expects the result to provide extra motivation for the Jamaicans for the rest of the championships.

“I’d want to commend his coach Stephen Francis and his team, as well as the management team, who is here giving support to the athletes. It was an excellent performance for Tajay, a huge personal best, and congrats to him and for the hard work he would have been dong throughout the course of the season,” Wilson added before speaking to its possible effect on the rest of the athletes in the team as well as those back home.

“This should be a great motivating factor for most of the athletes in the field events. There are other youngsters in Jamaica who have been performing very well, and a lot of time we tend to go for the glamour event, and I am quite sure this will set a platform for athletes who would want to be involved in other events; what we would call non-traditional events.

“This is an opportunity for G.C. Foster College, as the premier sporting institution in the Caribbean, to set the platform and the base to train more specialist coaches in these areas, so overall it’s a good look for other disciplines that have been overlooked,” said Wilson, the acting principal of the institution.

Wilson also expressed satisfaction with the performance of the mixed 4x400m relay team of Nathon Allen, Janieve Russell, Roneisha McGregor, and Javon Francis, which finished second in a national record 3:12.73, in their heat behind the United States, who registered a world record of 3:12.42 in the event that was making its debut at the World Championships.

The coach said that they will be making at least one change to the team, however, with Tiffany James coming in for the final, although he did not specify which of the females she would replace.