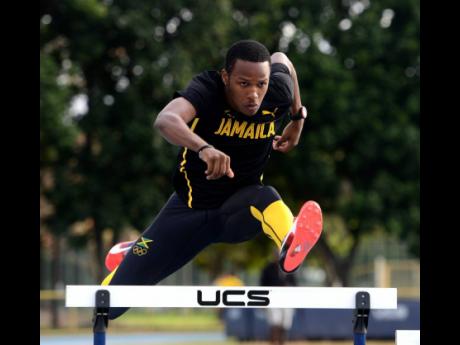 Founder and head coach of SWEPT Track Club Okeile Stewart believes that the addition of Jamaican hurdler Jaheel Hyde to his training group will lead to a return to form for the 22-year-old, who is looking to kick-start his career after a ­disappointing campaign.

Hyde, who in May 2018 left his former high-school coach, Christopher Harley, to move to MVP Track Club, will again be working under a new coach, with Stewart now charged with guiding the development of the national junior record holder from his base at The University of the West Indies, Mona campus.

Stewart said that the familiarity that he had with Hyde going back to his days as his massage therapist made it a natural fit, noting that he was excited for the opportunity to work with him.

“He is not a stranger to the persons I work with. I have been his massage therapist in the past, and as such, we would have some working relationship,” said Stewart to The Gleaner. “He (Hyde) is a great talent, and I’m happy to get a chance to work with him as his coach, and I am looking forward for great things from him.”

Stewart, whose group of athletes at SWEPT includes 2019 World Championship 400m hurdles bronze medallist Rushell Clayton, is eager to help the two-time World Under-20 400m hurdles champion realise his potential at the senior level and has set ambitious targets for the youngster, starting with the National Senior Championships next year, which will serve as a qualifier for the Tokyo 2020 Olympic Games.

“For certain, he wasn’t at the World Championships this year, and for Jaheel Hyde, [for] his standard and at his level, one would want to see him at the international scene,” Stewart said. “So for sure, the Olympics would have been the major goal for him, but first, we have to go through the national trials. So the first goal will be to make it to the national trials healthy and to win the national trails – that will be one of the goals I know he would have – then to take it from there to the Olympics.”

After being guided to youth World titles and a personal best of 48.52 seconds in the 2017 National Senior Championships under Harley, the 2018 Commonwealth Games bronze-medal winner made the decision to switch to MVP in the middle of last season after failing to go sub-49 seconds in his first four races.

Stewart, meanwhile, says that he is confident in the talent and potential of Hyde and believes that the former Wolmer’s Boys School standout, who also competed at the 2016 Olympic Games in Rio, is as motivated as he is to get back to the highest level.

“We would have looked at the goals, and we would have looked at the objectives that he would need to meet to achieve these goals, and I believe [because of] the partnership, I think it is possible because he is very talented. I believe that in the position that he is currently at, he wants to get back to the top, and I think that is a good recipe for success,” said Stewart.

In addition to Clayton, Stewart has also worked with the likes of another youth standout Dexter Lee, Sheldon Mitchell, Ainsley Waugh, Oral Thompson and Emmanuel Callender.