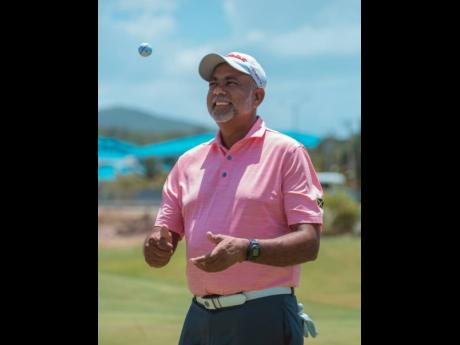 Contributed
Sean Morris celebrates topping the JGA Heroes Weekend Golf Classic on Saturday at the Caymanas Golf Club. He defeated Mark Newnham by just one stroke at the end of the two-day tournament, which started at the Constant Spring Golf Club.

Sean Morris teamed up with Mark Newnham to help Jamaica win the CGA Four-Ball Championships for the first time earlier this month, but they were fierce competitors at the Jamaica Golf Association (JGA) Heroes Weekend Golf Classic, with Morris coming out the winner by just one stroke.

Newnham was the leader at the end of day one after scoring 74 to Morris’ 77 at Constant Spring; however, when they journeyed to Caymanas on the second day, Morris posted 74 to Newnham’s 78 for two-day totals of 151 and 152, respectively.

Morris says it was a tricky two days of golf because of heavy rainfall over the island over the last few days.

“The conditions that existed at the Constant Spring golf course, as well as the Caymanas Golf Club, were quite challenging due to the thickened rough and it played like a real championship event,” he said.

“Coming off the high of being the senior champion of the Caribbean (with Newnham), it was quite an accomplished feeling for me to have won and a clear indication that my good form has carried from that. It is quite a challenge in this sport to ride the crest of a wave, but I have been working very hard and trying to tweak the game to get more out of my rounds, and it seems to be coming along nicely.”

Both men competed in the Men and Men Senior 0-6 handicap category, which saw William Knibbs taking third spot with scores of 76 and 82 for a two-day total of 158, or seven strokes behind the winner.

Diane Hudson posted scores of 94 and 97 for a combined score of 191 to get the better of the other lady in the tournament by 28 strokes, when Valerie Grant carded 115 and 104 for a total score of 219.

The tournament attracted some Americans who were on the island. Two of them topped the Men and Men Senior 13-24 category, with Ronald Allen scoring 92 and 91 at Constant Spring and Caymanas, respectively, for a total score of 183 or five strokes ahead of Carl Lewis 96 and 92 (188).