KC too much for Vauxhall 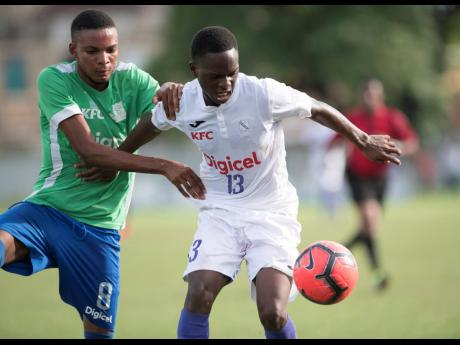 Defending champions Kingston College (KC) barely broke a sweat as they outclassed Vauxhall High 3-0 at Winchester Park yesterday to secure their spot in the quarterfinals of the ISSA/Digicel Manning Cup competition.

The Ludlow Bernard-coached KC were led to victory courtesy of a brace from Tyrese Williams in the 26th and 50th minutes, as Fortis won the two-way tie 6-1 on aggregate. Ajay Stewart netted KC’s third goal in the 90th minute.

Bernard said he was very happy with his team’s performance because they played well at both ends of the field.

“The effort was much better than the last game, because we were a lot more disciplined,” he said. “We survived some moments that I think Vauxhall played some good football, but I think at the end of it, the more supreme team would have prevailed.

“It was always on the card for us to get on the scoresheet, so what we really wanted, was to achieve a clean sheet, which we achieved.”

In the curtain raiser of the double-header, Excelsior also secured their path to the quarterfinals of the competition, despite losing 2-1 to Jonathan Grant. However, the Leebert Halliman-coached unit won the tie 4-2 on aggregate after their 3-0 win in the first leg.

Jevaun Gayle, in first minute, and Jaheim Jones in 32nd minute were the scorers for Jonathan Grant, while Aseany Richards scored for Excelsior in the 63rd minute.

Halliman blames his team’s defeat on their lack of concentration in crucial moments of the game.

“We need our boys to be more focused, because sometime we tend to lose concentration and get indisciplined, so we need to fix that going into the quarterfinals of the competition,” Halliman said.

Meanwhile, Camperdown also booked their spot in the quarterfinals with hard fought 2-1 win over Holy Trinity High, for a 2-1 aggregate victory after their first leg encounter ended 0-0.

St Andrew Technical also moved into the quarterfinals after beating Eltham 2-1 for a 4-3 aggregate win.

St George’s College booked their place in the last eight after playing to a come-from-behind 2-2 draw with Mona High for a 4-3 aggregate win. Wolmer’s edged St Catherine 2-1 to move in the quarterfinals with a 3-1 aggregate scoreline.

Jamaica College blanked Hydel High 2-0 and Charile Smith High edged St Jago 1-0. These games are the teams’ first meeting in the round as their original scheduling at the Spanish Town Prison Oval two days prior were postponed because of heavy rainfall.