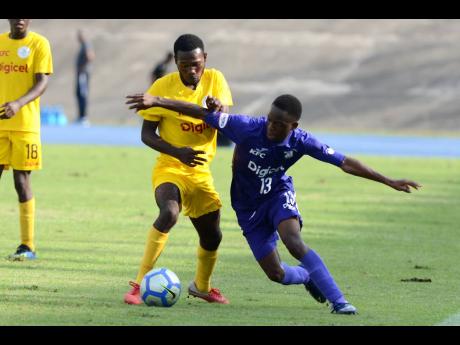 Defending champions Kingston College stormed past Charlie Smith 5-0 as the quarter-finals of the ISSA-Digicel Manning Cup continued from the National Stadium, yesterday.

Dwyane Atkinson led the way with two goals, while Ronaldo Robinson, Tyreese Williams, and Demario McCarthy all contributed, as the purples exerted their dominance from start to finish.

Charlie Smith head coach Jerome Waite acknowledged that his side were outdone by the defending champions’ superior quality but said that his young team will learn many lessons from the defeat.

“One of the objectives was for these young players to gain experience as well as exposure,” Waite said after the game. “We were up against the defending champions and they dominated the game throughout.”

Meanwhile, Kingston College head coach Ludlow Bernard was pleased with the performance of his team, especially on how clinical they were in taking their chances.

“I knew that we were going to create chances, but somehow we don’t have a good ratio when it comes to chances created and goals scored,” he said. “So I am pretty satisfied with the five-star performance this week.”

It didn’t take long for the champions to flex their muscles.

Ten minutes into the match, Atkinson got off the mark with a header from close range. Soon after that, Charlie Smith found ways to make the Kingston College defence uncomfortable, but did not have an end product. Robinson eventually doubled KC’s lead in the 39th minute with his low drive giving the goalkeeper Tuishane Edwards no chance. Robinson added another three minutes later to solidify their lead at the break.

Kingston College added two more in the second half to wrap up the points. Tyreese Williams’ one-time effort powered past Edwards after Robinson’s initial shot hit the post in the 55th minute and McCarthy got on the scoresheet by finishing off a great past from Jamari Morrison in the 77th.

The result left Kingston College on top of Group A of the quarter-finals with three points and a plus five-goal difference. Wolmer’s are also on three points with an inferior plus-one goal difference. Camperdown and Charlie Smith are on zero points after their respective defeats.

In the second match of the double header, a stoppage time strike by Chantomoi Taylor earned St George’s College a 1-1 draw with Jamaica College after Nickashe Murray gave the Dark Blues the lead in the 60th minute.

The points shared between the teams meant that St Andrew Technical (STATHS) lead quarter-final Group B with three points after the first round, with Jamaica College and St George’s tied on a point apiece. Excelsior High are at the bottom of the group as a result of their 4-0 lost to STATHS on Wednesday.