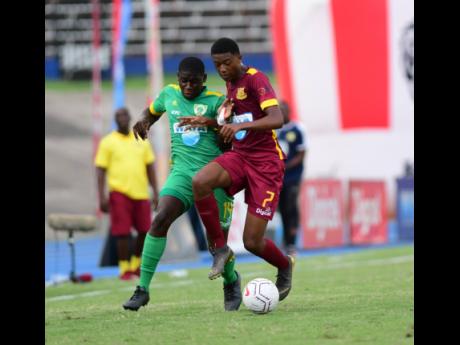 Gladstone Taylor
Dinthill’s Karim Bryan (right) is challenged by Excelsior’s Aseany Richards in their ISSA Champions Cup matchup at the National Stadium yesterday. Excelsior won 4-3 on penalties to advance to the next round.

Excelsior High rallied back from near elimination to defeat Dinthill Technical High School 4-3 on penalties as the opening round of the ISSA Champions Cup got underway yesterday at the National Stadium.

Agony turned to joy and relief for the Mountain View-based team playing on a day’s rest, after their Manning Cup Quarter-final defeat to St Andrew Technical High School (STATHS) on Wednesday.

Both coaches thought that they had enough chances to win it.

Excelsior Technical Director Leebert Halliman was pleased, however, with the result and is optimistic about his team’s chances in the tournament.

“We should have won it long ago but as the game went on Dinthill was a bit stronger than us,” Halliman said after the game. “We have a slim chance in the Manning Cup. We have a better chance in the Champions Cup.”

“We had majority dominance in the second half, we just didn’t create enough opportunities to score and the few that we got hit the frame,” said Gilbert.

Gilbert said that the missed opportunity to seal the win on penalties was down to a lack of execution.

“I think we prepared for it, we just didn’t execute. Credit must be given to Excelsior for executing theirs and moving on,” he said.

Manning Cup quarter-finalists Excelsior had the early run of chances in the first half.

Noel Rattray’s shot gave a favourable bounce to put through Jahiem Flemmings but Demerio Hill was quick to repel the effort. Rattray was also sent through but Hill was alert to deny Excelsior the opener.

Dinthill were under pressure for most of the half but had a golden chance to take the lead five minutes before the break.

Jehvonne Redman sent in a low cross on the right-hand side, which Carlington Facey got on the end of, but saw his effort bang off the post.

Almost immediately afterwards, Excelsior had a chance of their own take the lead. Jhevan Smith did well to cut past a Dinthill defender but his shot was saved by goalkeeper Demero Hill off the bar. Hill repelled the follow-up chance preserving the tie at the break.

It was the Linstead-based outfit that pushed the initiative in the second half. Rushan Parkinson saw his shot curl wide and Shavon Thompson saw his free kick clip the crossbar.

There wasn’t much generated from the Excelsior in the second half until the latter stages.

Aseany Richards, who came on as a substitute played a great pass towards Joel Jones on the right of the penalty area, but his delayed decision to shoot gave the Dinthill backline enough time to recover and block the shot.

Rojaughn Joseph had the chance to win it in stoppage time but his shot slammed on to the bar.

Dinthill had the advantage into the first two rounds of penalties making their attempts, while Mills saved Excelsior’s first attempt. Despite Kareem Bryan failing to convert for Dinthill in the third round, they held on to their 2-1 advantage after Flemmings couldn’t level the score for Excelsior.

Parkinson gave the daCosta Cup team the lead in the fourth round, pushing them closer to victory or so they believed. Excelsior converted their spot kick but Dinthill failed to win it from the spot on the fifth kick and Smith’s goal gave Excelsior a lifeline, which they gladly took. Smith repelled Wedderburn’s attempt in the sixth round and Alexander calmly slotted home to seal an unlikely victory for Excelsior.

In the second game, Clarendon College outplayed Wolmer’s to win 2-0 and book their spot in the next round.