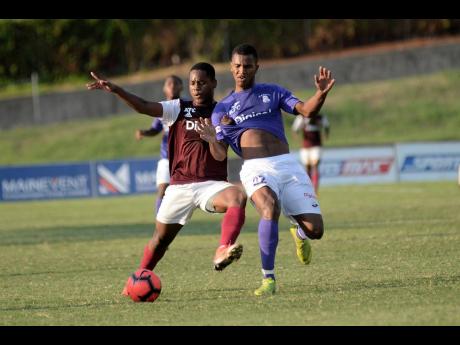 Camperdown kept their semi-final hopes alive with a comprehensive 4-0 win over Charlie Smith in their group G ISSA/Digicel Manning Cup quarter-final fixture at Stadium East yesterday, while Kingston College and Wolmer’s played out a 1-1 draw in their highly anticipated clash.

Captain Shaqueil Bradford led the way with a hat-trick for Camperdown, and Shawn Daley got on the scoresheet to give the Christopher Bender-coached team a crucial three points in the group ahead of their final game against defending champions Kingston College.

Assistant coach Donovan Lofters praised his team’s performance, knowing that there was little margin for error.

“The [result] is crucial. We went for the win in the first game [against Wolmer’s]. It didn’t happen. We had to win this one, so we look forward to the final game against Kingston College,” Lofters said after the game.

Meanwhile, Charlie Smith’s head coach, Jerome Waite, despite knowing that the result meant that his team was out of contention to qualify for the semi-finals, was pleased with his team’s run to this stage of the competition.

“No one expected us to reach so far,” Waite said. “The average age [of the team] is 16 years and three months. It’s a good development [process], and we just have to continue working and look forward to next season.”

Camperdown applied the pressure from the get-go, with Ronaldo Edwards threatening early on with a shot that sailed over the bar. Edwards kept Charlie Smith on their heels with another effort that was easily gathered by goalkeeper Tuishane Edwards shortly afterwards.

Charlie Smith captain Gianni Golding had a golden opportunity to fire his team into the lead as he got on the end of a low cross on the right-hand side while being left unmarked. He, however, blazed his shot over the bar.

It was a chance that he would regret not taking as Camperdown took the lead a few minutes later in the 26th minute of play when Bradford’s free kick from the right-hand side found Daley, whose header was dispatched into the net for a well-deserved lead.

They thought they had doubled their lead 60 seconds after the restart when Daley found Bradford in space and fired his shot into the back of the net, but the assistant ruled that he was offside when the ball was played.

Charlie Smith actually had their chance to level the proceedings three minutes later when Golding was sent through on goal. He did well to round goalkeeper Deshawn White, but his subsequent effort on goal was blocked by a Camperdown defender.

Camperdown had many opportunities to increase their lead, with Tivelle Edwards combining with Bradford before seeing his effort trickle wide, Ronaldo Edwards also having his shot saved by goalkeeper Edwards.

They eventually got the second goal on the stroke of half-time as Bradford attacked Charlie Smith’s right side and finished calmly past Edwards.

It was one-way traffic throughout the second half as Charlie Smith could not find answers to threaten their opponents’ back line. Bradford got his second of the game in the 66th minute with an excellent low blast past Edwards before completing his hat-trick seven minutes from time, tapping home from close range after substitute Kenley Deacon did well to bulldoze through on the left and supply the pass.

In the second game of the double-header, the top-of-the-table clash between defending champions Kingston College and Wolmer’s Boys ended in a 1-1 draw.

Dwayne Atkinson put KC in front in the 18 minute, but Wolmer’s restored parity in the 74th minute through Ronaldo Webster.

The results mean that KC and Wolmer’s are tied on four points apiece in Group G, while Camperdown are one point behind with three points.