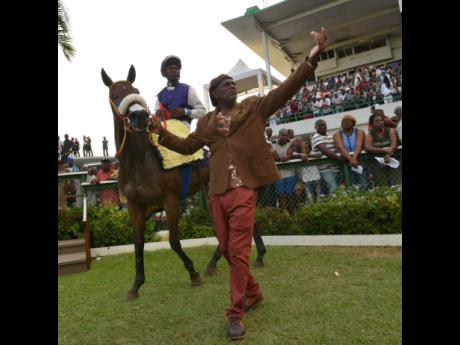 Kenyon Hemans
She’s A Maneater, with Omar Walker aboard, is paraded before the Caymanas Park crowd after winning the Diamond Mile race yesterday ahead of Stranger Danger and Toona Ciliata.

The 2017 winner more than made up for last year’s disappointment when she had bolted at the start, attacking STRANGER DANGER and TOONA CILIATA at the half mile and dominating every yard of the race thereafter.

STRANGER DANGER, unbeaten in nine starts heading into the event, was left to fend off TOONA CILIATA for second, as the stablemates earned a combined $8.9 million for DaCosta, taking the champion trainer’s tally to approximately $11 million in stakes for the day in his $13.7 million chase of leader Anthony Nunes.

TOONA CILIATA earned $1.3 million for Nunes, whose other runners on the programme, including fifth-race winner, GRAYDON, bagged him approximately $4 million, keeping the stakes leader around $6 million clear of DaCosta, who closed a four-timer with MY LITTLE SISTER in the 13th and last race, having also won with LOVELY DAY and LADY BLUE in the second and 11th events, respectively.

WALKER AT HIS BEST

Omar Walker was at his best astride LADY BLUE and, of course, SHE’S A MANEATER, for DaCosta, sharing stable honours with apprentice Raddesh Roman, who was astride LOVELY DAY and MY LITTLE PRINCESS for the defending champion trainer, who is hell-bent on landing a 19th title at the expense of Nunes, who is hunting his first.

Leading rider, apprentice Christopher Mamdeen, and fellow apprentice, Kiaman McGregor, each rode back-to back winners to join Walker and Roman on two winners apiece on the day’s mammoth card that ran behind schedule and was in a race with dusk to complete the final event.

SHE’S A MANEATER’s brilliant victory aside, Gary Subratie’s two-year-old, WOW WOW, clocked an eye-popping 1:04.4 for five and a half furlongs, notching his sixth straight victory, a lonely six and a half lengths, to confirm himself a shoo-in for champion of his age group a month in advance of the Jamaica Two-Year-Old Stakes.