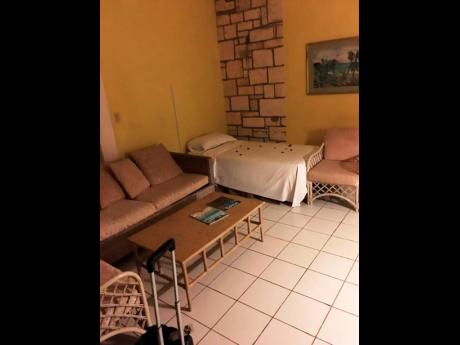 Contributed
A picture of hotel room at the Starfish Halcyon Cove Hotel in Antigua and Barbuda.

The Reggae Boyz’s preparations for their Concacaf Nations League match against Antigua and Barbuda were hampered after they arrived in that country on Monday evening to less than desirable accommodations.

The Jamaicans, who play the hosts on Friday at the Sir Vivian Richards Stadium, were greeted with poor conditions in their hotel rooms at the Starfish Halcyon Cove Hotel in Antigua and Barbuda, sending the Jamaica Football Federation (JFF) into crisis mode yesterday as they scampered to make alternative arrangement for the contingent.

JFF president Michael Ricketts said yesterday that arrangements had been made to relocate the team, which was eventually moved to another property, the Verandah Resort and Spa.

Reports are that the rooms at Starfish Halcyon Cove Hotel were infested with mosquitoes, had unkempt bathrooms, and lacked basic amenities. As a result of the problems being experienced, yesterday’s scheduled morning training session was cancelled as the players reportedly were not able to get any sleep because of their discomfort.

Ricketts, who noted that the Starfish Halcyon Cove property had been used to host the team before, described the situation as unfortunate.

“I think that it is a most unfortunate situation because it is a hotel that we have been to before” Ricketts told The Gleaner. “We were having discussions with the Antigua Football Association, and they would have been part of the arrangement. I think the problem is that the rooms that were assigned to the players were substandard. It’s not so much that the hotel was the problem, but it’s the rooms.

“We are in the process of having them (the team) relocated. We are in contact with our colleagues in Antigua, and as we speak, we are having them relocated to another hotel. We are on top of the situation, and I am pretty certain that it will be sorted out quickly,” Ricketts added.

Ricketts shared that despite the setback, he remains confident that the team and technical staff will settle and get a positive result against the Antiguans.

Jamaica head into their final two games in Group C of League B in first place with 12 points.

They require just one point to secure automatic promotion to League A and the resulting 2021 Gold Cup spot. The matches will also be critical in preserving their top six Concacaf ranking, which will secure their participation in the final round of qualifying for the 2022 World Cup.

They will complete their group assignments against Guyana next Monday at the Montego Bay Sports Complex.