Fraser-Pryce up for Female Athlete of the Year 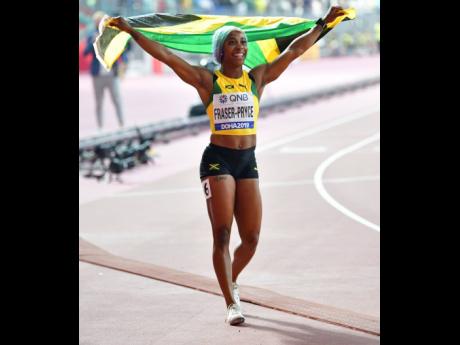 Shelly-Ann Fraser-Pryce’s victory in the women’s 100m at the World Athletics Championships in Doha, Qatar, in late September provides more evidence for the debate whether she is the greatest female sprinter of all time.

But, it may not have done enough to help her win the World Athletics Female Athlete of the Year award, a prize she won in 2013.

Fraser-Pryce, who is among the five finalists vying for athletics most prestigious female award, has her Pan American Games 200m title to accompany her world title as major achievements in 2019.

However, American Dalilah Muhammad, with her two world record performances and world title in the 400m hurdles, is leading the race for the award, which will be presented today in Monaco.

Muhammad broke Yuliya Pechonkina’s 16-year-old mark of 52.36 seconds when she blitzed to 52.20 at the US Trials in July.

She lowered the record to 52.16 on her way to claim her first world championship title in Doha.

Fraser-Pryce’s achievements in the 2019 athletics season though were other-worldly.

She now holds the most 100m titles, male or female, in the history of the World Championships, returned to the pinnacle of her event after giving birth to her son Zyon, won seven out of her 10 100m races and played a pivotal role in Jamaica reclaiming their 4x100m relay world title.

The other three finalists are the Netherlands’ Sifan Hassan, Venezuela’s Yulimar Rojas, and Kenya’s Brigid Kosgei.

Hassan broke the mile world record with 4:12.33 at the Monaco Diamond League.

Rojas won the world triple jump title and won nine out of the 12 competitions she participated in.

Jamaica’s junior athlete, Britany Anderson, the holder of the world Under-18 age group record, is also up for an award tonight.

The 18-year-old is among the five finalists for the World Athletics Female Rising Star Award.

Anderson, who sped to 12.71 seconds in June to break the under-20 100m hurdles record, was shortlisted with Ethiopia’s Lemlem Hailu, Ukraine’s Yaroslava Mahuchikh, Ecuador’s Glenda Morejón, and USA’s Sha’Carri Richardson.

Richardson is the favourite to win the award, as the American ran two age-group records last season. She posted 10.75 seconds and 22.17 seconds in the 100 and 200m, respectively.