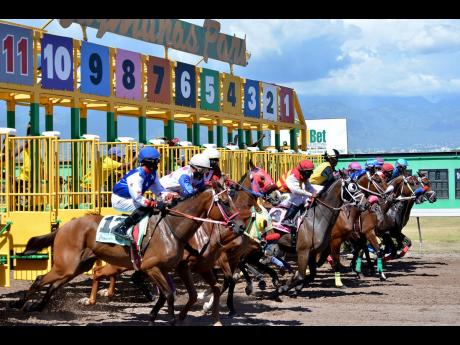 Kenyon Hemans
Horses storm out of their gates for the running of the fourth race at Caymanas Park on Saturday, August 10, 2019. Focus has now turned to a dwindling horse population at the track’s stable, as one of the issues affecting revenue in local horse racing.

United Racehorse Trainers Association of Jamaica president Ryan Darby has responded to wage concerns by grooms at Caymanas Park, noting that an adjustment was not possible without a purse increase.

Darby noted that owners themselves have not received a purse increase in over two years, adding that the low number of horses, training fees and other expenses have combined to put the pinch on trainers and owners in particular who, he argues, operate at a loss in many cases.

The purse is a reference to the total amount of money committed to being paid out to the top finishers in races.

The average groom at Caymanas Park earns $3,500 per week for each horse that they condition. In addition, they also earn five per cent of whatever purse money that horse may bring in.

A $100m purse increase was made in 2017 when Supreme Ventures Racing and Entertainment Limited (SVREL) took over the operations of local racing.

However, Darby told The Sunday Gleaner that while the members of his association understand the plight of grooms and acknowledge the importance of their role in the racing industry, the conditions are not there to grant them a pay rise at this point.

“Based on the purses, the amount of horses and based on training fees, the owners are losing a lot of millions of dollars before the year start,” Darby said.

“Everybody is coming and saying they want an increase, but there is one thing that needs to be increased more than anything else and that is the purse money,” Darby added. “The owners cannot give the grooms an increase right now because they cannot afford it.”

Darby said that his association is willing to sit and discuss the wage issue with the grooms once they are being granted a purse increase by SVREL.

“These grooms’ wages went up since I have been the president two years ago and I have not discussed a purse increase all now,” he said. “Until we discuss a purse increase with SVREL, then the grooms just have to just give us a little time because the money has to come from somewhere.”

Subsequent to telephone contacts, questions on whether or not a purse increase was possible or being considered were sent to SVREL representatives via email on Thursday. However, a response was not provided.

Meanwhile, veteran trade unionist and Hugh Shearer Labour Studies Institute head, Danny Roberts, said that the grooms need to be properly compensated and called on the Ministry of Labour to intervene.

“The horses have to be taken care of and they (grooms) would not have been employed if they didn’t have a critical role to play,” Roberts said.