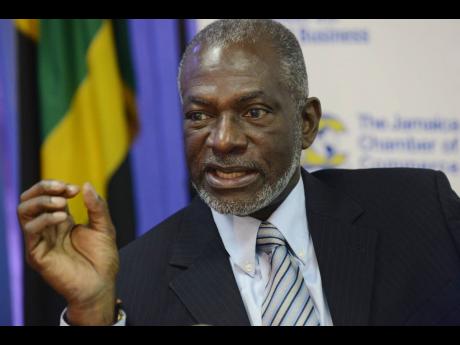 If Jamaica qualifies an ice hockey team to the Winter Olympics, September 8, 2019 will be regarded as a key moment in the programme’s history.

“Firstly, this was a tremendous achievement by the senior team,” Anderson said. “By winning this tournament, we have forced other ice hockey playing countries to recognise and accept the arrival of Jamaica on this big stage.”

The tournament was hosted at the training facility of National Hockey League (NHL) team Florida Panthers. It comprised teams from Mexico, Brazil, Argentina, Venezuela, Chile ,and an assembled Rest of the World Squad.

Anderson described the impact of having NHL representatives present, as proof of the country’s growing emergence in the sport.

“The fact that the NHL saw the need to have a presence there speaks to the degree of interest that Jamaica has created by its participation,” he said.

Jamaica charged through the competition with three straight wins in pool play against Argentina, Brazil, and their final opponents, Colombia. After beating Mexico in the semi-finals, they faced Colombia again with the title at stake.

After leading 2-0 in the first period, the Colombians stormed back scoring in the second and third periods to level the match. After a goalless overtime period, the LATAM was decided in a shoot-out, which saw the Jamaicans prevailing 2-0, as Teegan Moore fired home the championship-winning shot.

Anderson was proud of the players, the majority of whom live overseas, with all claiming Jamaican heritage.

The administrator shared that the players were overcome with joy over the support that they received during the three-day tournament.

“They are very emotional about this and the open and vocal support they have received from the Minister of Sport Olivia Grange, the Jamaica Olympic Association, the coaching and management staff, the hundreds of spectators who turned up every day to cheer them on, our Consul General Oliver Mair, as well as some parents who travelled from very far, served to strengthen their conviction that playing for Jamaica is second to nothing they have experienced in the sport,” Anderson beamed.

Since the title win, plans have been put in place for the construction of an ice rink on the North Coast of the island.

Anderson in an earlier interview with The Sunday Gleaner welcomed the development but warned that it must be self-sufficient and feasible from a commercial perspective.

“Those are possibilities, but obviously, it has to be a commercially viable venture, so that it can pay for itself. So all of these things are being looked at. This is something that the federation and the ministry [of sport] have discussed in great detail,” Anderson said.

He referenced the success of the Jamaican bobsled team that made history with their Winter Olympic debut in 1988, stating that their success can be replicated in ice hockey.

“Internationally, the success of the bobsled team in making it to the Winter Olympics has helped to cement in the minds of the other ice hockey playing countries that it is quite possible for Jamaica to do so on the ice rink,” he said.