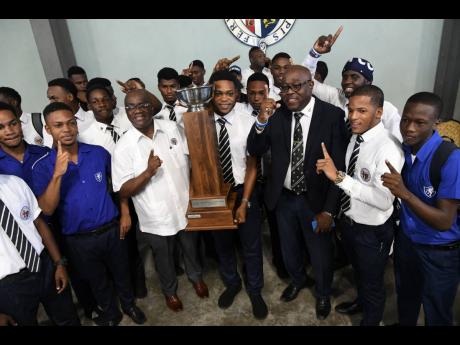 Jamaica College (JC) principal Wayne Robinson has declared the beginning of a new era for the school after it captured the 2019 ISSA/Digicel Manning Cup title. The victorious team was celebrated at a special assembly yesterday morning at the Karl Hendricks Auditorium on the school grounds after its penalty shoot-out win over St Andrew Technical High School (STATHS) at the National Stadium on Friday.

With students, faculty, and alumni present, Robinson congratulated the team on its success and announced triumphantly that the trophy was back where it belonged at the school’s Old Hope Road base.

“Gentlemen, the Manning Cup belongs to us!” he said to the student body.

“We believe that we are the football champions of the country, and we have now started a new era and a new reign,” he told The Gleaner. “I know there is a sentiment that says JC has won too many times. Well, you are going to be tired to see our faces. We are going to be here again, and we are always going to be here.”

Team captain Tyrese Small addressed his peers, thanking them for the support all season and praised his team for the character shown throughout the campaign.

“I’m very proud of my teammates because we know what is really happening in the camp and how the mental toughness came in, and we fought well,” he said.

After having their five-year title run from 2013-2017 stopped by Kingston College (KC) last year, the ‘Dark Blues’ returned to the urban schoolboy summit despite barely qualifying from the quarter finals with only two points in their group. Since then, they won two consecutive penalty shoot-outs matches against KC in the semi-finals and STATHS in the final for the second time in three years. They won their previous title in similar fashion in 2017, the final title won by coach Miguel Coley, who had spearheaded the five years of dominance. He found new company in Davion Ferguson, who equalled his 2013 feat of winning it all in his first season.

Ferguson, who took over the programme in April, credited the school’s established environment as one of the keys to the school’s continued success.

“Jamaica College has a rich history, a rich culture of doing well,” he said.

“But credit must be given to the structure that was in place. I believe they had a structure in place that could withstand anything.”

Jamaica College will have an opportunity to finish the season with two trophies when they battle back-to-back champions Clarendon College in the Olivier Shield final this Saturday at the National Stadium.