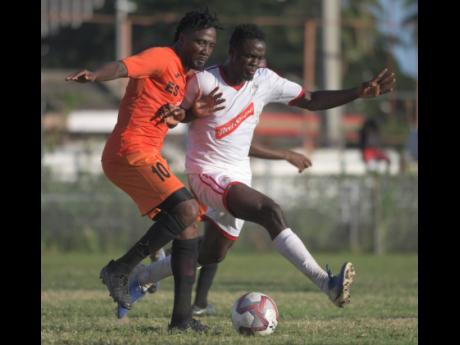 Tivoli Gardens had to fight hard to eke out a point in a come-from- behind 2-2 draw with UWI in their Red Stripe Premier League encounter at the Edward Seaga Complex yesterday.

The crucial point enabled Tivoli to remain in ninth place on 22 points from 19 games while UWI continues to languish at the bottom of the table in 11th place on 15 points. With towering striker Newton Sterling missing due to personal reasons, Tivoli found the going tough in the opening stanza, with forward Stephen Barnett wasting a couple of glorious opportunities to put the home team ahead.The best chance of the lot was a one-on-one with goalkeeper Amal Knight in the fifth minute, with the custodian coming up with a big save.

Tivoli would rue that chance, as immediately afterwards, UWI would go in front mere seconds later following an impressive solo effort from Shemar Hunter, who turned defender Kavon Wilson impressively at the top of the box and fired past Nicholas Clarke to stun the home fans.

Tivoli put together a couple of more attacks of their own, and they should have levelled things in the 27th minute, but Rochane Smith, a former UWI captain, stabbed his effort over the bar from close range following some nifty work down the left side by Nathaniel Leslie.

The start of the second half brought more misery for the west Kingston side as they were hit with a double whammy in the 54th minute. Defender Jabeur Johnson turned the ball into his net following a fast-paced run and fierce cross from Ryan Miller down the right side.

Johnson would, however, turn from villain to hero in the 80th minute as it was the defender who stepped up to convert a penalty following a controversial foul on Trayvon Reid.

With time running out, Tivoli committed several players forward and it was substitute Donovan Dawkins who would come up trumps in time added on. The former Jamaica College striker fired home from close range following some good work down the right side from Reid.

For Tivoli’s coach, Philip Williams, it was a master stroke to introduce his bench players at the right time.

“I was not pleased with our conversion rate in front of goal,” he said. “I am pleased that the bench players were able to come on and make an impact, putting up a fight in the last couple of minutes of the game, but we have to get better at converting our chances. “It’s a work in progress, and we will continue to work on our game.”

Losing coach Andrew Peart blasted the immaturity of his team in the final stages of the game.

“It’s pretty terrible,” he said. “We were 2-0 up with a couple of minutes to go, and we can’t keep the opponents out. That has been the nature of our game. Some split-second decisions are costing us games, and we have to address that. Maybe we need some reinforcements as well, going forward.”