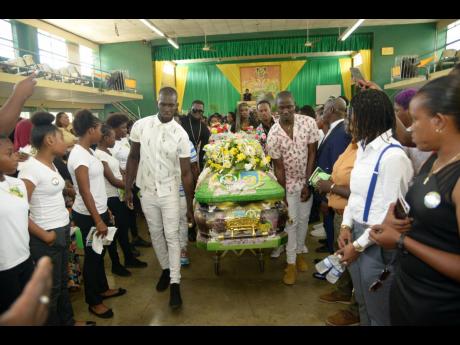 Described as a born leader and one who would “go the extra mile” for others, family, friends, teammates, and well-wishers gathered yesterday to say goodbye to national senior women’s footballer Tarania ‘Plum Plum’ Clarke, who passed away in October.

The funeral took place in the auditorium of the Excelsior High School, her alma mater, which she led to three ISSA schoolgirls football titles and from which she graduated from last June. The Mountain View community, where she grew up, turned out to honour Clarke, who was said to be on the verge of greater aspirations in football. Among those who came to pay their respects were Jamaica Football Federation (JFF) president Michael Ricketts; national, school, and club teammates; as well as Members of Parliament Fayval Williams and Anthony Hylton.

Aldrick McNab, special adviser to Minister of Sport, Olivia Grange, conveyed condolences on her behalf, saying that Clarke should be celebrated as she was able to have a big impact during her brief life.

“Let us be thankful for her life and take comfort in the fact that we were visited, though only for a short time, by an immensely gifted person who was kind, gentle, humble, and of genuine quality,” McNab said. “Everyone who knew her would have experienced a sensational individual. It’s hard to turn the page when someone won’t be in the next chapter, for the story must go on.”

“She would have wanted to be with us all, to be here with our happiest smile of our times together,” Shaw said. “For the memories I have with her, I can tell you she was a strong person. Plum Plum’s presence will be missed by all, but she will never be forgotten.”

Clarke died on October 31 when she was stabbed during an alleged fight with a friend over a cell phone in Half Way Tree. She was 20 years old.

Ricketts lamented the loss of Clarke, saying that a lack of empathy has resulted in the forfeit of what he describes as a promising future.

“It is so sad and painful to have lost someone which such a future,” Ricketts said. “From her days at primary school, she has exhibited that ability to lead. I want to use this opportunity to ask all of you that we showed love. We [need to] go back to the days when we respect and show love to our friends. One single act of indiscretion has cost the community, the school, and certainly Jamaica, [someone] with such great talent.”

“We have a culture of reprisal,” Bolt said. “Reprisal exists because we don’t know how to forgive. In a world where forgiveness exists, reprisal cannot exist.”

Clarke captained the Waterhouse women’s team to four league titles, with her rise through the ranks of the national youth system coinciding, representing the under-15 and under-17 teams before making her senior debut on September 30 during the Caribbean round of the Concacaf Women’s Olympic Qualifying tournament. She scored her first international goal in a 12-1 win against Cuba and scored again in the 11-0 rout of St Lucia. She made a total of three appearances for the senior national team.