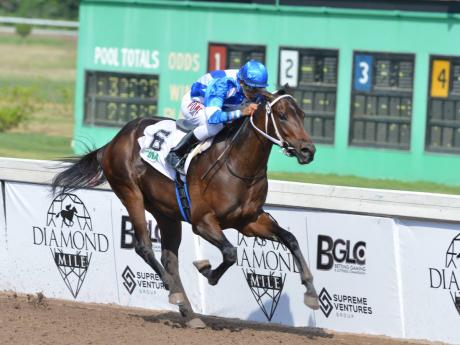 GARY Subratie has sights on a Boxing Day double, a WOW WOW romp in the Jamaica Two-Year-Old Stakes, which should make the bay colt the first horse to bag the $1-million bonus for sweeping the Supreme Ventures Limited Jamaica Two-Year-Old Series, which, along with the purse, would effectively hand his owner, Michros, his first owner’s title.

Unbeaten in seven races after losing on debut, WOW WOW will chase history, some time after 1:30 p.m. in the third event on the nine-race Boxing Day card. Wayne DaCosta’s FEARLESS CHAMPION, who was five and a half lengths behind WOW WOW in last month’s Pick-3 Super Challenge, at seven furlongs, should again be the exacta horse.

Subratie’s SENTIENT will start favourite in the eighth event at seven and a half furlongs. Tread carefully, though SENTIENT, on paper, appears to be the horse to beat after being cut down by a flying PRINCESS AVA at a mile two Saturdays ago, losing by two and three-quarter lengths in a fast-run 1:37.3.

SENTIENT reported with one easy gallop, 1:10.1 for five and a half, the last five in 1:03.0, with what appeared to be vet wraps on all four, a little over a month after placing fourth in the November 9 Diamond Mile.

Prepping for Thursday’s race, SENTIENT still hasn’t been asked a serious question at exercise, some six and a half weeks after the Diamond Mile, for which he had contrastingly warmed up with a zippy 1:06.1 for five and a half furlongs.

Should SENTIENT, now fitted with a visor, replacing blinkers, falter again in the stretch run, Anthony Nunes’ TRICKY ONE, PRINCESS AVA’s stablemate, who was only three-quarter length behind him in third place at a mile, could be the spoiler, although carrying topweight 126lb.

Due to circumstances beyond our control, we are unable to publish the Supreme Ventures Racing and Entertainment Limited tipster competition, tipster standings, and today’s final programme. We apologise for any inconvenience this has caused.