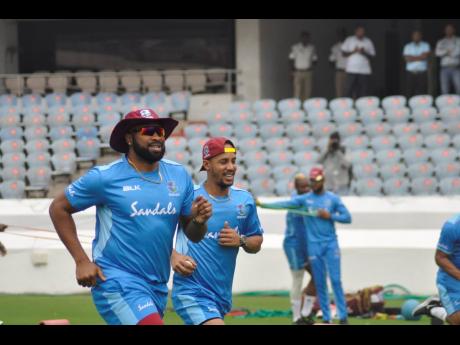 CWI Media
Windies One Day International and Twenty20 captain Kieron Pollard (left) and teammate Lendl Simmons warm up during a training session at the Rajiv Gandhi Stadium in Hyderabad, India, on Tuesday, December 3, 2019.

The 51-year-old Penney, who played 158 first-class matches, has penned a two-year deal ahead of the six-match limited overs series against Ireland which bowls off at Kensington Oval in Barbados on January 7.

“Trevor is an excellent coach and has demonstrated this everywhere he has worked,” said Simmons, who took over the Windies ahead of the recent Afghanistan tour.

“He has huge experience with Sri Lanka and India at the highest international level, and in most T20 leagues around the world including the CPL. He brings enormous energy and is very well respected by all the players.”

Penny is also an experienced coach at the international franchise level, having served as assistant coach with King’s XI Punjab, Deccan Chargers and Kolkata Knight Riders in the high-profile Indian Premier League.

He was also in the past attached to the St Lucia Zouks and St Kitts and Nevis Patriots in the CPL.

The Englishman said his ultimate goal was to prepare Windies for the major tournaments on the immediate horizon.

“I’m thrilled and excited to be given this opportunity to work with this brilliant bunch of cricketers and staff led by Kieron Pollard and Phil Simmons,” Penny said.

“I’ve been lucky enough over the last few years to work with several members of the squad and the Caribbean is like ‘home away from home’ for me being involved in the CPL.”

He continued: “We have two big T20 World Cups coming up (in Australia 2020 and India 2021) and it’s my aim to try and improve everybody and be as good as we can and hopefully win those two major ICC events for the great people of the West Indies.”

Penny is the second individual who is not a West Indian to join the Caribbean side’s coaching staff since Simmons’ appointment, following the hiring of Indian Monty Desai as batting coach earlier this month.