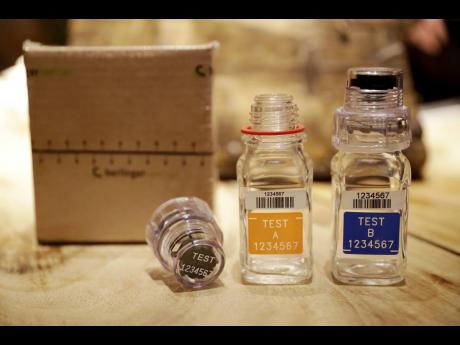 File
A test kit for human urine doping testing with A and B sample bottles.

As some countries have pushed forward with laws to criminalise doping in their jurisdictions, Sport Minister Olivia Grange says that her ­administration will not be enacting any similar practice in Jamaica.

Grange maintains that there is no need at this time to assign criminal penalties to those guilty of doping violations, as there are already measures in place to deal with those incidents; including local and international regulations.

“We believe we already have a very good framework for dealing with doping in sport, including the National Anti-Doping in Sport Act, the Jamaica Anti-Doping Commission (JADCO) rule, the World Anti-Doping Agency (WADA) code, and the United Nations Education, Scientific and Cultural Organisation International Convention Against Doping in Sport to which we are signatory,” Grange told The Gleaner.

Despite the WADA code serving as an international framework to deal with cases of doping, countries have gone ahead to police the practice by assigning jail sentences to those responsible for taking performance-enhancing drugs and those who supply them. Specifically, Germany, in 2015, passed legislation that gave up to three years’ jail time for athletes found guilty of doping, and 10 years for those who supplied them. Then German Justice Minister Heiko Maas assured the country after the law had passed that it would make German sport “cleaner, safer and more honest”. Kenya also has plans to make ­doping a criminal offence this year.

However, Grange has warned of the possible complications that would arise if Jamaica were to move in that direction.

“We must remember that many of the performance-­enhancing substances are legal within an everyday context,” she said. “Many of them are found in ­medicines, including over-the-counter ­medication. We should also ­consider that doping in sport is professional misconduct. If we were to ­criminalise doping in sport, we would be treating sports practitioners differently from other professionals such as doctors, ­lawyers, pharmacists, et cetera, who are generally disciplined by their professional body for misconduct.”

WADA issued a statement in 2015 regarding the conversation on criminalising doping, saying that it was not in favour of jail sentences for guilty athletes, citing also the structure in place to deal with such matters.

“The agency believes that the sanction process for athletes, which includes a right of appeal to the Court of Arbitration for Sport, is a settled process, accepted by all governments of the world, and further that the sanctions for a doping violation by an athlete, which now includes a longer, four-year period of ineligibility, have been globally accepted by sport and government. As such, the agency does not believe that doping should be made a ­criminal offence for athletes,” the statement read.

Grange reaffirmed her confidence in the regulations already on the books and continues to promote the anti-doping sessions done by JADCO, so all local ­athletes can be armed with the necessary information to avoid being involved in any such incidents.

“We have a good framework for addressing doping violations,” she said. “At the same time, we ­continue to push our public education and sensitisation ­programme at JADCO. It is a priority ­programme that aims to ensure that our sportsmen and sportswomen have the ­information to help them to comply with the anti-doping rules.”