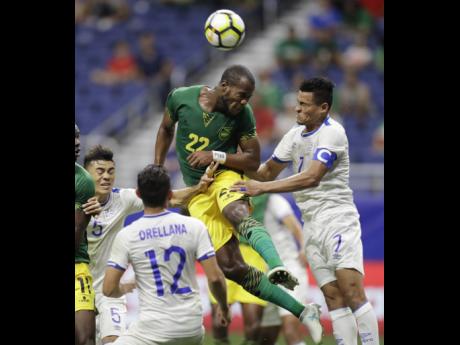 AP
Jamaica’s Romario Williams (centre) tries to put a header on goal against El Salvador during a CONCACAF Gold Cup match in San Antonio in July 2017. The game ended 1-1.

The 25-year-old forward signed with Miami FC on a free transfer pending league and federation approval. The announcement was made on the club’s website on Wednesday. Williams who last played in America’s second tier with Charleston Battery in 2016 says that he is eager to get started with his new club.

“I am elated to be joining The Miami FC. I’m very thankful for the opportunity to be a part of this incredible organisation and excited for the upcoming season,” he said on the team’s website.

Miami FC president and general manager Paul Dalglish says that Williams’s goalscoring ability will be a valuable asset as the club competes in it’s first year in the USL Championship.

“We are delighted to welcome Romario to the Miami FC family. After meeting Romario and his family, we are convinced that he is not only an outstanding player but an outstanding person who will be an asset on and off the field,” he said.

“He is a ruthless goalscorer and he shares our motivation to challenge from day one in the USL Championship.”

Daglish went further on to say that the signing reinforces the clubs commitment in bringing quality players to the team and the league.

“This signing demonstrates our ambition to bring the best talent to the USL and give our fans great entertainment in the heart of Miami,” he said.

Miami FC started play in the lower tiers of American football from the now-defunct North American Soccer League(NASL), to the National Premier Soccer League and National Independent Soccer Association. They were granted entry into the USL Championship having acquired the franchise rights from the Ottawa Fury who ceased operations. Miami will make their league debut in March.

Last season saw Williams struggle for playing time in Major League Soccer (MLS), America’s top flight, only managing to make two appearances for Atlanta United during the first six months of 2019. In total, he played 19 games for the club and was a part of the roster that won the 2018 MLS Cup championship in the club’s second season. He was traded to the Columbus Crew in July where he played seven times and scored only one goal during his six -month stay.

He last played for the Reggae Boyz in September 2018 during the Concacaf Nations League qualifiers.