Clarke: Teamwork the key to success in 4x400m 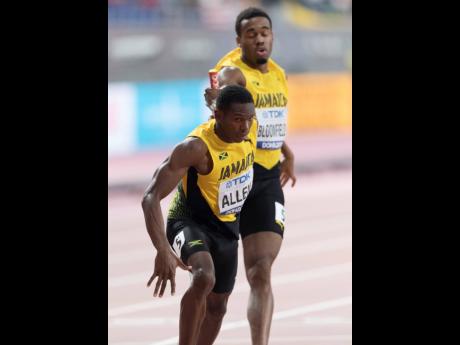 Davian Clarke, the man who is regarded by many to be Jamaica’s best mile relay runner, believes that the current group of quarter-milers can end Jamaica’s six-decade wait to win a global title in the event if they apply the same strategy the teams of the 1950s and 1990s used.

Jamaica has not won a gold medal at a World Championships or Olympic Games in the men’s 4x400m since Arthur Wint, Les Laing, Herb McKenley, and George Rhoden broke the then world and Olympic record to claim gold when they posted 3:03.9. at the Helsinki Games in 1952.

Clarke, who won an Olympic and four World Championships silver medals in the event for Jamaica, believes that the current group of Akeem Bloomfield, Nathon Allen, Rusheen McDonald, Jovan Francis, and others, has the potential to win if they start strategising from early.

“The 4x400m teams in 1948 and 1952 were a core group of guys who kept running for years and years. They worked together for a period of time, and that is why they were successful,” Clarke said. “My group of quarter-milers in the 1990s and 2000s had a core group as well. In anything, especially athletics and the relays, teamwork is important. It’s vital that all the members of the team understand what their roles are. In order to achieve their goals, they have to start planning and deciding who is going to run what leg so when they get to the meet they are fully prepared. So a person would have the opportunity to prepare for a year or two for the first or second leg, or whichever one.”

Clarke, along with Danny McFarlane, Gregory Haughton, and Michael McDonald own the national record of 2:56.75 with their silver-medal winning performance at the World Championships in Athens, Greece, in 1997.

“When I ran with Michael McDonald, Gregory Haughton, and Danny McFarlane, we decided before we even got to trials who is going to be running what leg. And then we were training along those lines, and then when we see who made the team, we made the necessary adjustments. But normally, we make the decision in advance so that a person can train and be prepared for that moment,” Clarke said.