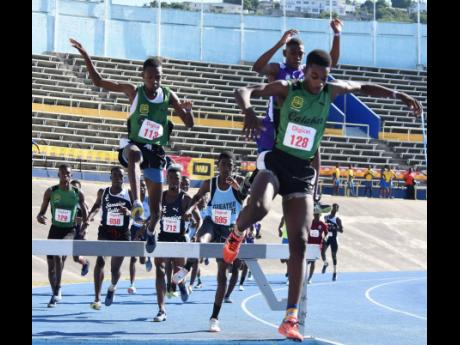 The ISSA Boys and Girls’ Championships 2019 winner gave early signs that he is ready to defend his title at the annual meet with a brilliant 13.12 seconds run. Gray, who broke his teammate Amontae Wray’s one-year-old record of 13.16 led a KC of the top three places as Jaden Campbell (13.60) and Nicardo Johnson (13.64) were second and third, respectively.

Kingston College showed their strength in the hurdle events by also capturing the Class Four and Class Two events. In the Class Four 80m hurdles, Romario Williams (12.02) won ahead of Zoos Young of Jamaica College (12.36) and Sewayne Kerr of St Elizabeth Technical, 12.43. There was a one-two for the host team in the Class Three 100m hurdles as Yourie Lawrence stopped the clock at 14.38 seconds to win ahead of teammate Amaontae Wray (14.48). Jamaica College’s Peter Calvin was third in 14.62.

There was an anti-climax in the Class One 110 metres hurdles as the expected clash between last year’s Boys’ Champs Class Two champion Vashuan Vascianna of St Jago High and Class One champion Wayne Pinnock of Kingston College did not materialise. Both won their preliminary-round heats easily but failed to show for the final. The red-hot Pinnock broke his own meet record of 13.16, set a year ago, with a fine run of 13.09 just three-hundredths of a second outside his Champs. Vascianna won his heat in 13.79 seconds. Jerome Campbell of Calabar won the final in 14.49 seconds, running against a negative wind of 2.4 metres per second. Jaheim Stern of Jamaica College (14.67) was second while his teammate, Justin Chisolm, was third in 14.85.

Petersfield High’s Alexix James created an upset in winning the Class Two girls 100m hurdles in 14.05 seconds running against a negative wind of 4.4 metres per second. She ran on strongly to surprise the St Jago High pair of Kayla Gay Clarke (14.11) and Sashel Reid (14.16) who had to settle for second and third, respectively.

Calabar’s Rivaldo Marshall continued his winning form this season in the middle-distance events as he recorded an impressive 5:56.29 to capture the 2,000m steeplechase open from Kingston College’s Kirk Dawkins (6:10.05) and Aryamanya Rodgers, 6:13.70.

Petersfield’s Antonio Watson maintained his good form in the 400 metres after taking the Class One event in 46.40 seconds. Rusea’s High’s Raheim Scott took second in 48.74, and Calabar’s Romario Northover was third in 48.87. Tariq Dacres of Jamaica College took the Class Two event in 49.32 while Kingston College dominated the Class Three event. Mercinho Rose won in 50.89 from teammates Jordan Mowatt (52.00) and Dushaun Grant 62.15.