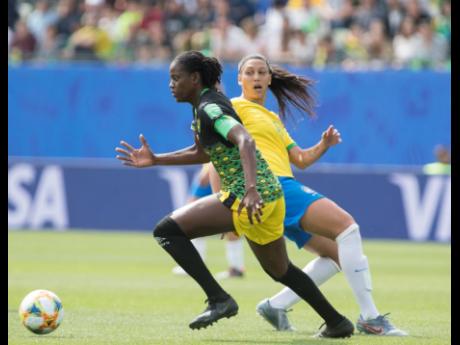 Gladstone Taylor
File Reggae Girl Konya Plummer (left) was forced off the field by an injury early in the second half.

It was one of the most pathetic displays of football by any Jamaican age-group team as the Reggae Girlz put in a hapless display in Texas to go down by 9-0 to a professional and clinical Canada team in their CONCACAF Women’s Olympic Qualifier.

The loss put an end to the Jamaicans Olympic dream as they lie third in the group without a point after two games, with only the match against St Kitts and Nevis remaining.

With captain Khadija ‘Bunny’ Shaw cleared to play after picking up a head injury against Mexico and the inspirational defender Konya Plummer returning to the starting line-up, the Jamaicans were expected to put in a better showing against the Canadians.

But it was complete domination by the Canadians from the opening whistle as they pressed the Jamaicans high and had them on the back foot for the entire game.

It took only 10 minutes for the Canadians to get the opening goal as Jordyn Huitema hit the back of the net after the Jamaican defence failed to clear their lines, which allowed the striker to fire home from close range.

Five minutes later, it was 2-0 as Dionne Rose bundled in a well-placed right-sided cross from the ever-present Janine Beckie.

Beckie would then get on the scoresheet just before the half as she slotted home from inside the area after some more neat work down the flank by Huitema.

Down three goals, Coach Hubert Busby Jnr decided to change things up as he brought on striker Kayla McCoy and dropped Shaw back in midfield.

That tactic didn’t change the outcome much as the Canadians continued to press forward, utilising both flanks.

The fourth goal for the Jamaicans would be a double blow as Beckie outpaced defender Plummer to fire home her second on the night. The ensuing play caused an injury to Plummer, who had to be substituted by Alyssa Whitehead in the 51st minute.

With the stuffing knocked out of the Reggae Girlz, the Canadians raided the Jamaican goal at will, and it was a matter of how many goals the Jamaicans would concede on the night.

Well, that answer would be five more as Huietama wrapped up a five-timer, and Beckie would complete her hat-trick as the Canadians stamped their dominance in the group.

The Jamaicans managed only two shots on target during the entire match, and that summed up their pathetic display as they now turn their attention to the bottom-of-the-table clash with St Kitts and Nevis on Tuesday.