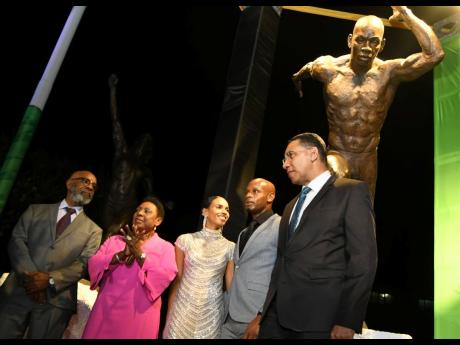 Heralded by Prime Minister Andrew Holness as the spark the triggered Jamaica's modern dominance of male spiriting, Asafa Powell joined the list of Jamaican athletes honoured with a statue at a ceremony at Independence Park on Sunday evening.

The statue created by Basil Watson depicts Powell exploding from the blocks; en route to his various sub 10 second performances, the most of all time at 97.

Jamaica Athletic Administrative Association (JAAA) president Warren Blake said that Powell's accomplishments were extraordinary, taking into account how many times athletes have gone under 10 seconds since 1968.

“This is really extraordinary when you consider that the 10 second barrier was first broken in 1968 by Jim Hines and it was not broken again until 1983," Blake said. "For someone from a nation as small as Jamaica to have done it 97 times is nothing less than phenomenal."

Holness said that Powell’s unorthodox path to greatness served as a reminder that success is possible with dedication and constant commitment to one’s craft.

“Your route to your destination maybe different but as long you have determination, willingness to put in the hard work, you will get there," Holness said. "This is why the JAAA has described Asafa as one of the greatest sprinters in history, and I concur.”

The statue was the final part of the Ministry of Sport’s Jamaica Legacy 55 project which paid tribute to Jamaica’s outstanding athletes. Usain Bolt, Shelly-Ann Fraser-Pryce and Veronica Campbell-Brown were all honoured with statues at Independence Park.