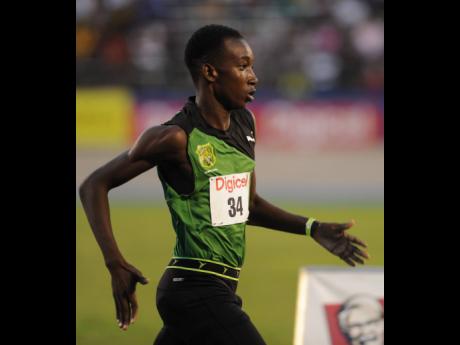 Calabar High’s track star Kimar Farquharson has declared that 2020 is shaping up to be his best ever year at high school.

Farquharson hit top form yesterday to win the Camperdown Classics Class One 800 metres in a meet record time of 1:49.46. His time is the fastest in the event this season and it also eclipsed the previous record of 1:50.60.

The 18-year-old Farquharson, who shattered the Boys’ Champs Class One record in the event last year with a time of 1:48.67, said he is aiming to run much faster this season.

“I think this season is going to be my best season ever at high school, because I am training hard and I have a good training partner and he is pushing me,” he said.

“I know that I can go much faster at Boys’ Champs and so I am just keeping myself on this pace,” the Calabar student said.

Farquharson, who won the event by more than 20 metres, added that he was very pleased with his execution of the race.

“I had it in my mind that I wanted to run 1:49 because I opened my season with 1:51.42 and so I wanted to drop the time and I did that and I am happy about it. The execution of the race was good because the first lap was a little fast, as it was 51 seconds, and coming home in the last 20 metres, I eased down because I was watching the clock, but that is OK,” Farquharson said.

“I have the World Under-20 and Olympics on my mind for this year. Hopefully, I make it to the Olympics in Tokyo,” he said. Farquharson’s teammate Rivaldo Marshall was second overall in the event with a time of 1:53.41 while third went to Jamaica College’s Rushane Fullerton in 1:54.38.