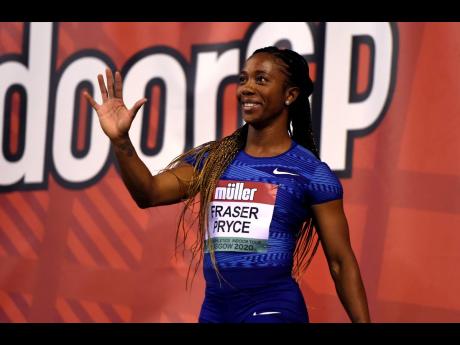 The 33-year-old Fraser-Pryce clocked a season’s best 7.16 seconds to capture the event ahead of reigning World Indoor 60m champion Murielle Ahoure of Côte d’Ivoire in 7.22. Another Jamaican, Natasha Morrison, was third in 7.30.

It was Fraser-Pryce’s second straight victory over the distance this season, after opening her campaign with 7.32 at the Milo Western Relays at the G.C. Foster College a week ago.

Jamaica’s Julian Forte finished eighth in the men’s equivalent in 6.81. The race was won by American Ronnie Baker in 6.50 ahead of his teammate Mike Rodgers, 6.67. Third went to Slovak Jan Volk in 6.68.

Tissanna Hickling leapt to 6.38m to finish sixth in the women’s long jump event. The event was won by Ukraine’s Maryna Bekh-Romanchuk with mark of 6.90m while second went to Khaddi Sagnia of Sweden with 6.53m and third was Jazmin Sawyers of Great Britain with a best of 6.47m.