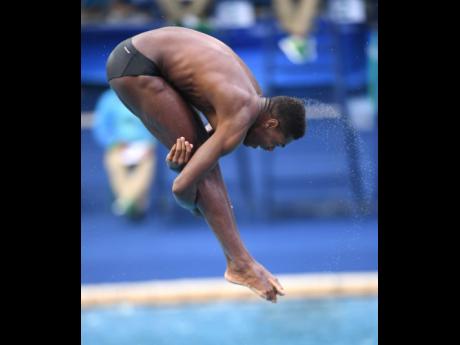 Olympian Yona Knight-Wisdom captured his first medal of the 2020 season, winning a silver in the 3m springboard at the opening FINA Diving Grand Prix meet in Madrid, Spain, last Saturday.

The Pan American Games silver medallist posted a score of 441.40 points to take second behind Briadam Herrera of the United States who took gold with a combined score of 456.80 points. His countryman Steele Johnson took bronze with 440.15.

This is Knight-Wisdom’s first medal on the Grand Prix circuit. He said that while winning the title would have been ideal, he was pleased with his performance in his season debut

“I’m so happy with the outcome of Madrid. I couldn’t have really asked for much more. A gold medal would have been nice but any place on the podium is awesome,” he told The Gleaner.

The 24-year-old qualified for the semi-final round in fifth place with 373.63 points in the preliminary round and then advanced to the six-man final with an improved score of 428.25 points behind Australia’s Shixin Li and Johnson. From there, Knight-Wisdom managed to maintain 70-point scores throughout his six dives, top-scoring with 76.50 points on his second and final dives.

While he is pleased at the improvements made ­during the competition, he feels that there are improvements that can be made as he was not pleased with his ­preliminary round total.

“I’m generally happy with my processes through the competition; the way I improved through the rounds was great. But my prelim was about 40 points off where I would actually like my score for a prelim. So I need to do some work to make sure that’s something I improve [on].”

In the lead-up to the first event of the diving circuit, Knight-Wisdom expressed that his preparations have not been as smooth as he would have liked. With his first medal of the circuit secured, he says that the performance has proved that he is in a much better state of mind than previous years.

“That shows that my competition head is so much stronger than it used to be, so now if my training is ever a bit off I don’t panic or worry that I can’t do it and lose confidence in myself,” he said. “I’ve learnt to just weather the storm and the sunshine normally comes shortly afterwards.”

Knight-Wisdom will have little time to enjoy the victory as he will dive back into competition in the Grand Prix’s second meet at the Hallenschwimmbad Neptun in Rostock, Germany, starting tomorrow.