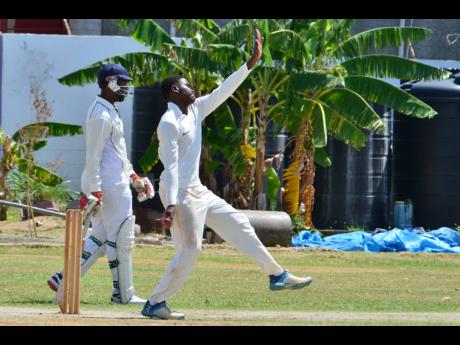 St George’s College Under-19 cricket team captain Nicholas Lewin says that his expectations for his team will remain high as long as they play at their best in this season’s ISSA Grace Shield competition.

Lewin says, “Once we play our best cricket, then as the captain, nothing more can be asked of the team.”

The 17-year-old all-rounder says that his team can win the competition with the current form that it has been experiencing so far.

The team topped their first-round group ahead of rivals Kingston College, Ardenne High, and Penwood High.

“I think the season has gone well for us so far being that we’ve topped the group and have moved on to the semi-final round,” he said. “So yes, once we play the right cricket and train hard, I believe we can win the competition this year.”

Lewin has been enjoying some of the best cricket of his career and is a shining figure in the George’s squad. Following in the footsteps of his inspiration, Chris Gayle, Lewin has tallied many runs this season, with a triple century against Penwood High recently.

“It was a good feeling,” he said. “My thoughts after the triple century were to just keep training harder. Once you keep training, then the outcome will only be good. The aim is just to keep that good record going.”

After this season, Lewin aims to earn a spot in the national U19 cricket programme with a final goal of making it to the 2022 U19 World Cup, set to be hosted by the West Indies for the first time.

“With the regionals coming up this summer, I’m looking to performing in that, and, hopefully, to be picked for the U19 World Cup for the upcoming 2022 season,” he said. “I think you just have to be confident in everything that you do.”