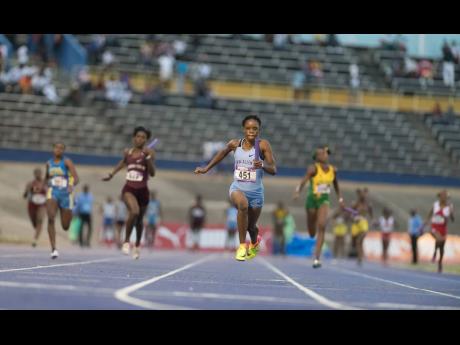 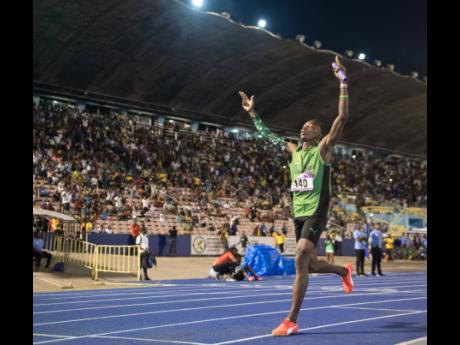 Edwin Allen High’s Class Two 4x100 metres quartet of Serena Cole, Tina Clayton, Brandy Hall, and Tia Clayton continued their dream season yesterday at the 44th staging of the Gibson McCook Relays inside the National Stadium. Smashing records has become quite easy for these four girls and yesterday they broke their one-year-old meet mark of 44.75 seconds with an impressive new clocking of 43.73.

All eyes were focused on the Edwin Allen quartet coming into the meet following their eye-popping 43.80 seconds record run two weeks earlier at the Central Championship. At approximately 6:02 p.m., as the athletes went to their marks for the Class Two event, there was a hush among the fair-size crowd as they anticipated something special. Cole, running out of lane four, was off to her normal good start, covering the field easily and from there they were racing the clock. Tia sprinted away from the field on anchor as they produced the second fastest time ever by a high school female quartet. Holmwood ended second in 45.17 with third going to St Jago in 45.78.

Earlier, their Class One team with an impressive second leg from wonder girl Kevona Davis, gave her school a winning start after taking the 4x100m in 44.70, ahead of St Jago, 45.08, with Holmwood third in 45.38.

St Jago also had two wins in the 4x100 metres. They won the Class Three and Four events. In Class Three, they surprised favourites Hydel winning in 46.81, ahead of Edwin Allen, 46.91. Hydel had to settle for third in 47.17.

St Jago made up for their narrow Class Four loss to Edwin Allen at Central Championships by scoring a decisive win in the 4x100m event. They clocked 47.28 as Edwin Allen took second in 47.97. Vere Technical were third in 48.96.

Kingston College stole the spotlight among the boys in the sprint relays. They captured the Class One and Two 4x100m Championship events. Their Class One quartet of Jaheim Cox, Roshawn Rowe, Andre Coke, and Tyreke Stennett had to hold off a fast finishing Calabar to win in 40.44. Calabar clocked 40.46 for second while Jamaica College (40.70) were third.

They made it two from two quickly as their Class Two quartet, with Nkrumie Bouwahjgie on anchor, sped to victory in 41.06, ahead of St Elizabeth Technical (41.51) and Jamaica College, 41.61.

Calabar got their lone sprint relay win in Class Four where they won in 45.47. Kingston College took second in 45.48 while Elizaberh Technical crossed the line third in 46.14.