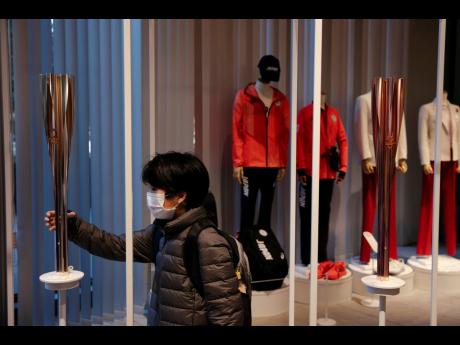 AP
A boy with a mask poses with an Olympic torch of the Tokyo 2020 Olympics while visiting Tokyo Olympic Museum on Sunday, February 23, in Tokyo.

The rapid increase in speed and momentum gathered by the spreading coronavirus (now identified as Covid-19 is moving at wildfire pace, with the confirmed cases worldwide mushrooming to almost 90,000, and official deaths rapidly approaching the 3,000 mark.

In the wake of more and more countries reporting first-time positive tests for the virus, The World Health Organization (WHO) has elevated the global risk of the outbreak to ‘very high’, which represents the top level on its risk-assessment scale.

One report out of China is even suggesting that the numbers coming out of China are significantly under-reported, thus the crisis might be even worse than it appears. It is in that context we ponder the games of the world.

Already, the top flight football League in Japan, the J League, has been suspended. Some weekend games in the Italian Serie A were postponed. Other international sporting and recreational events have already been cancelled in the wave of the now global uncertainty about the virus.

The reality now facing the wider world of sports is that even the unthinkable could happen.

The 2020 Olympic Games, set for Tokyo, Japan, could very well be cancelled. The Olympic Games represents the grandest of all stages for all sportsmen and women. No more so than Jamaicans, especially for our athletics royalties. The immeasurable levels of feel-good emotions that are poured across the length and breadth of the nation from this prestigious quadrangular event is huge.

Talk of a relocation of the Olympics have been floating about but really make no logical sense, due to the uncertainties that continue to cloud the origin, transmission, characteristics, and pattern of behaviour of this now monster virus. Wherever the Olympic Games could be moved to, the crisis would follow due to the sheer number of bodies that will have to gather in a common space, which would provide fertile ground for the spread of the virus.

The fact that the timeline for the development and deployment of a vaccine has been set conservatively at between 18 months to two years, spells even more doom for the prospect of the Tokyo-bound spectacle, which is scheduled to begin in another five months. All indicators are pointing to the very likely cancellation of the 2020 Olympics. Not even the estimated US$25 billion that was already spent on the preparation for the event should be allowed to trump good sense.

As sad a day as it would be for all the athletes of the world, and especially the Jamaicans, who would be denied their massive day in the sun, it is what it is. As tough as it would be for the likes of Shelly-Ann Fraser-Pryce, Yohan Blake and others, who would likely be having their last hurrah on this grand stage, they would simply have to take it on the chin.

Even as the prophesies and predictions are being intertwined with the swirling conspiracy theories about the origins of this virus, the fact of the matter is that there is a fast-growing global crisis that is rapidly getting out of control.

It is generally in moments like these that the innate good of humanity rises to the top.

The Covid-19 strain of the coronavirus is threatening to bring the world to its feet, at which point common sense dictates an unconditional appreciation that there are things in this life more important than sports, and on such thing is the sanctity of life itself.