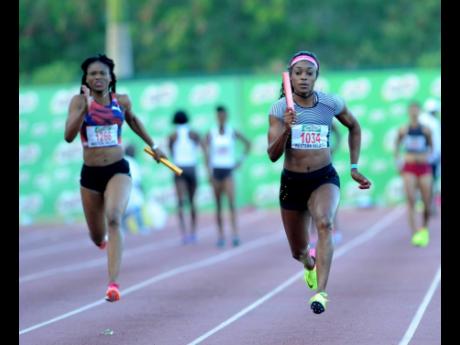 Ricardo Makyn
Elaine Thompson (right) anchoring the MVP team to victory in the Women’s 4x100 metres relay at the Milo Western Relays at the Montego Bay Sports Complex in 2017.

Sports Minister Olivia Grange says that resources have been allocated to repair the synthetic track surface at the Montego Bay Sports Complex in St James.

“The funds (for the new Montego Bay Sports Complex track) are available in the 2020 fiscal year. So it will be done,” Grange told The Gleaner. “The estimates were done previously. We were hoping to actually get the track repaired in the last fiscal year. But we are now at the end of the 2019 fiscal year. We are moving into 2020 and it has been allocated.”

Grange was speaking on Sunday at a press conference launching the Athletes Assistance Programme for athletes who have qualified for, or are on the verge of qualifying for the 2020 Olympic Games and Paralympic Games, set for Tokyo, Japan, this summer.

The track was forced to be taken out of service due to the deteriorating conditions, which raised concerns that athletes could be seriously injured if the track was not repaired. The situation has had serious impact on athletics in western Jamaica with the staging of the Milo Western Relays being relocated to GC Foster College of Physical Education and Sport in St Catherine.

Concerns were previously raised by Western Relays committee chairman Ray Harvey that the lack of the event at its rightful home in Montego Bay would have a negative impact on the development of track and field in the west.

“There is no question about it, we are losing ground. The fact that we don’t have our precious track, which is the catalyst for development,” Harvey stated during an interview earlier this year. “The sooner we get our track back, the quicker we will be able to get back on track and the rapid development triggers in again.

At the statue unveiling ceremony for Asafa Powell on February 9, Grange committed that the repairs will be completed in time for the 2021 staging of the Western Relays.

“We are going to make every effort for it to be on target for next year,” Grange said.

The Montego Bay Sports Complex was developed by the Urban Development Corporation and opened in June 2010. It has a seating capacity of 7,000 and in addition to its athletics facilities, also boasts multipurpose courts a football field, administrative facilities, bathrooms and lighting.