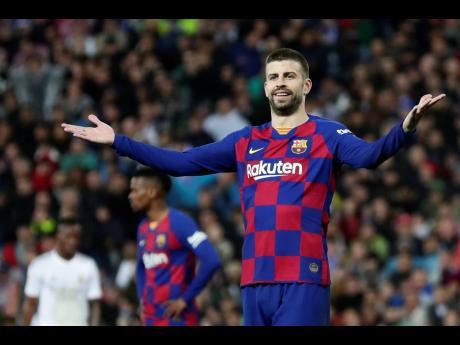 The Spanish league and players are still far apart on the size of the salary cuts they need to take to help reduce the financial impact caused by the coronavirus outbreak, with the footballers saying the organisation wants them to carry nearly half the total losses.

The league and the players’ association have been in talks to try to find ways to mitigate losses that could reach nearly €1 billion (US$1.08 billion) if the season cannot be restarted because of the pandemic.

The players have said they are willing to reduce their salaries, but not as much as the league or the clubs want.

“After analysing the current circumstances of the sector and given the distance in conversations with the players’ association, it is necessary to adopt measures in view of the serious economic crisis that COVID-19 is causing in the Spanish football industry,” the league said in a statement.

It also added that government furloughs are “an exceptional mechanism to avoid and mitigate the negative impact that COVID-19 is having on the sector, and thus guarantee its subsequent recovery”.

According to media reports, the league expects losses of €957 million (US$1.03 billion) if the season is cancelled, with €303 million (US$327 million) lost if it resumes with games in empty stadiums, and €156 million (US$168 million) of deficits if it continues with fans.

The players said the total cuts in salaries requested by the league would account for €451 million (US$487 million) if the top flight cannot restart.

The reduction in salaries being discussed reportedly varies depending on the clubs, and also on whether they are playing in the Champions League or the Europa League.

Team captains met with the players’ association late Friday to discuss their options after the league earlier in the day called for all clubs to put the footballers on government furloughs to reduce labour costs while the stoppage of play continued. The furloughs help the clubs and guarantee players their jobs once the crisis is over.

The league said it is responsible for preserving an industry that represents 1.37 per cent of the nation’s gross domestic product and employs about 185,000 people.

Atletico Madrid and Barcelona were among the clubs to resort to the furloughs in recent days. Both reached an agreement with players to reduce their salaries by 70 per cent, and guaranteed the wages of other employees were unaffected.

There are nearly 125,000 cases of the new coronavirus in Spain, which on Saturday surpassed Italy as the country with the second-most infections behind the United States. The death toll in the nation stands at 11,744.

The government is expected to extend lockdown measures until April 26, likely keeping the Spanish league suspended until then.