Calabar were on target for special 4x800m time 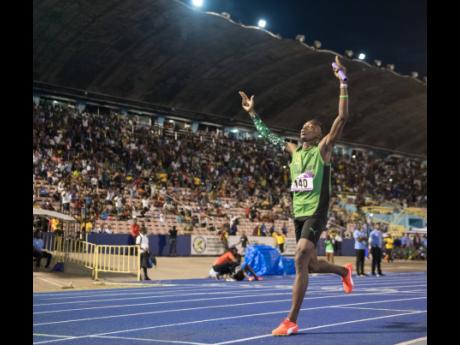 Gladstone Taylor
Kimar Farquharson of Calabar High celebrates as he crosses the finish line in the 4x800m open for high-school boys at the Gibson McCook Relays on February 29, 2020.

Following their performance at the 2020 Gibson McCook Relays where the team coasted to a meet record of 7:29.04 to break their one-year- old mark of 7:31.71, assistant coach of Calabar, Omar Hawes, in a recent interview, stated that the present team was better than that of 2018.

“Fans were in store for something special this year from our 4x800m relay team, as this team was much stronger than the 2018 team,” said Hawes.

With the cancellation of this year’s Penn Relays Carnival due to the coronavirus pandemic disease, the usually large Saturday crowd was robbed of a special performance as the Red Hills Road-based team was set for another record run. At the Gibson McCook Relays, they were expected to be challenged strongly from a trio of Kingston College, Jamaica College and St Elizabeth Technical. However, in the end it was no contest as they blew away their rivals.

What was astonishing about their victory was the manner in which they won as they toyed with their opponents all the way. Farquharson, who ran the third leg on the record 2018 team, and who is now the best schoolboy half-miler in the country, had little to do on the anchor leg at the Gibson McCook event. Getting the baton some 80 metres ahead of nearest rivals Kingston College after brilliant runs from David Martin, Kevroy Venson and Marshall, he bounced all the way on the final lap as Kingston College had to settle for second in 7:36.24.

According to Hawes, this Calabar quartet was at least two seconds faster than the team of two years ago, and Penn Relays fans could have seen a fantastic 7:24.0 time.