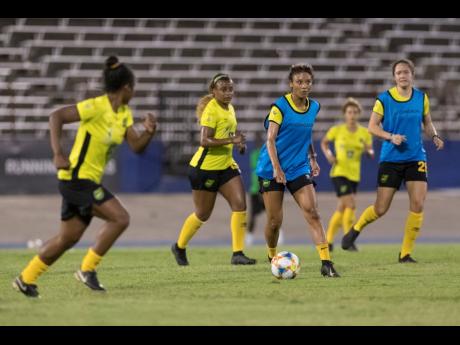 Gladstone Taylor
Jamaica’s Christina Chang (second right) plays a pass into the path of Mireya Grey (left) during a senior women’s team training session at the National Stadium in Kingston on Monday, May 13, 2019.

Busby spoke of measures that he termed “best practices” that have been recommended to the Jamaica Football Federation (JFF) to maximise the Reggae Girlz’s potential on the world stage. Among the plans that he hopes to execute are the development of a high-performance department, the use of analytical data to assess players’ fatigue and performance, and the securing of matches against high-level competition.

While he acknowledges that these plans were recommended during former head coach Hue Menzies’ term, Busby says there is more attention being placed on fulfilling those needs.

“A lot of those things are carried over from the past, but a lot of them, we are working a little bit more diligently to put those things in place, especially in terms of high performance and analytical data away from the players,” he said. “[Those are] things that we are really trying to put in place for both programmes (men and women).

Busby attributes his optimism to the establishment of the JFF Technical Committee, with which he says discussions have been transparent and positive, an improvement over previous incidents of discord.

“One of the keys I will give credit to the federation for was establishing this technical committee, who I’ve met with, who were very open and welcoming,” he said. “I think that was probably the piece that sometimes got lost within the communication. So I do think having that technical committee, where staff can work in collaboration in putting the best practices in place, has been very encouraging for me, and having the federation, both as the [executive] board and the technical board, listen to some of those recommendations from both myself and ‘Tappa’ (senior men’s team head coach Theodore Whitmore) has improved, I believed.”

Busby took charge of the Concacaf Women’s Olympic qualifiers held in January, but the Reggae Girlz did not qualify for the Tokyo Olympics. He said recently that plans were being finalised for the Girlz to play an international friendly in Europe last month, but the coronavirus pandemic cancelled them. But Busby says he still hopes to go ahead with those plans someday.

He said that challenging themselves against quality opposition is critical to better preparing them for similar tournaments in the future.

“If the best women’s team in the world (world champions the USA) is in our region, how do we get close to that? We have to play teams that are much better than them in order to reach that level,” he said. “And we have to play in environments that are uncomfortable for us so that there are no nerves. And we can’t be playing better opposition when there are qualifiers on the line. It’s too late.”