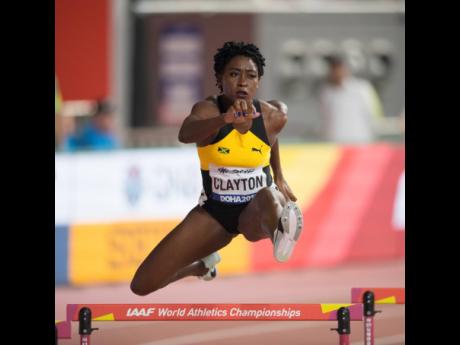 National 400m hurdles champion Rushell Clayton is concerned about what she says are inequalities between men and women in track and field.

Clayton was speaking at a Women in Sports Conference in Kingston recently and discussed issues of inequality in wages and publicity between both sexes in the sport.

“Men get more money. It is a fact,” Clayton told The Gleaner. “And if we do get recognition, it’s not half of what men get.”

Clayton believes that in Jamaica, it starts from an early age since the top boys teams get more support than their female counterparts at the annual ISSA/GraceKennedy Boys and Girls’ Athletics Championships.

In terms of decision making, the gap is large, too. Statistics were mentioned at the conference to show that among the 47 sports organisations under the Jamaica Olympic Association (JOA), only six have a female president. That is only 13 per cent.

“One woman to nine men, that is really sad. It’s crazy, and it does have an impact,” Clayton said in response to the figures presented.

According to her, changes will come by speaking out more.

“We have to put our voices out there because if nobody says anything, changes will not be made,” she said.

That is the reason why the World Athletics Championships 400m hurdles bronze medallist in Doha, Qatar, wants to mentor younger girls.

“It is important to share my journey and what I’ve been through and letting them know that it is possible. And I’m still on my journey because I have so much more to contribute to the sport,” she said.

For Clayton, support and self-confidence are very connected.

“When you don’t have enough support, you tend not to want to push because it takes a lot in a sport like this. And with injuries, you get depressed. And when you’re depressed, you lack a lot of self-confidence,” she said.

“Sometimes, the females do have more exciting races,” she said. “Why do we always have to run before the men?”

Clayton told The Gleaner that she wants to be part of the change.

“It’s slowly changing,” she says. In this regard, she will be involved in sports even after her career ends.

“I’m not going to be a coach, but I’m definitely going to be involved in something with regard to sports,” she said.