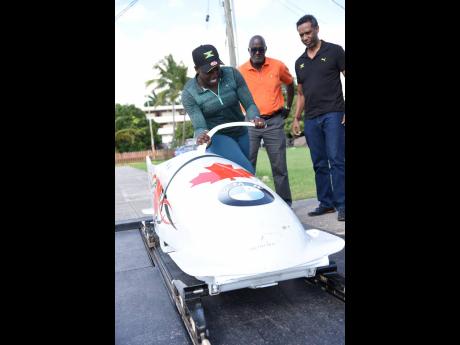 Jamaica Bobsled and Skeleton Federation president Nelson Stokes says that sustainable revenue from the sport will be achieved by creating a powerful brand that is viable independently from in-competition performance.

Stokes was speaking on Thursday in a wide-ranging Gleaner Instagram live interview where he discussed the present state of the sport in Jamaica, plans for long-lasting success, and his experiences during the historic 1988 Winter Olympic campaign in Calgary, Canada.

Stokes revealed that negotiations are in place for branding opportunities which will allow the sport to benefit financially, while not going into much detail.

“We are right now bringing to some closure, branding on water, energy drinks, clothing. That is the area that we are moving into,” he said. “I don’t want to say too much because we are literally in it now.”

While he says that they have been able capitalise financially in spurts, having a strong independent brand presences will allow for a constant revenue stream for bobsled.

“One of the things that bobsled suffers from is their cyclical nature of our exposure and the Winter Olympics, which is an every four-year thing,” he said. “The trick that we are trying to pull is to create a brand so strong, separate from the performance on the field so that you can create a revenue stream through the years. And we have been able to do that.”

Stokes pointed to past agreements that have been forged with companies such as Sandals, Red Stripe and Puma as examples of sustainable revenue streams. However, he believes that to harness the potential that the bobsled can monetarily create, more partnerships will be necessary in order to not solely rely on results in major competitions.

“To get it to the level as a separate brand, you have to get into joining your brand with products and services that can either be sold or taken advantage of as a service or as an endorsement, and we continue to do that,” he said.

He is adamant that the responsibility does not fall solely in his sport but with other sports to take up the mantle, lamenting that Jamaica has not yet managed to take advantage financially.

“It is challenging and we have not as a country generally done enough to own the brand and monetise the brand. It’s a fight that I am in every day and it’s not good enough that we are making progress in my corner. It’s something that we have to do everywhere,” he said. “What it will take is a clear understanding that we are in business and we have to value the brand, and so on.”