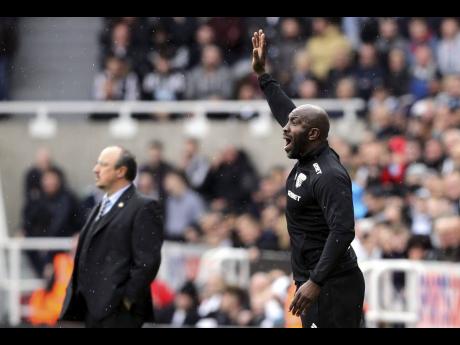 File
Former national defender Darren Moore, pictured here, is one of just a small number of black men to have managed an English Premier League club, having worked at West Bromwich Albion.

Speaking with The Gleaner on Thursday, Mann addressed the return of the English Premier League (EPL), as well as the players showing solidarity with the Black Lives Matter movement and how the momentum can be used to trigger lasting change.

The calls for better representation in positions of power in football have been amplified recently by Manchester City forward Raheem Sterling, in the midst of global anti-racism protests following the death of George Floyd in police custody in the United States. He addressed the insufficient number of black coaches getting chances across the 91 clubs that make up the English football pyramid in a recent interview on BBC political programme ‘Newsnight’. Mann says change must be driven at the executive level to see lasting results.

“For me, the focus has to be on the leadership in the boardrooms,” he said. “Because I believe that, if we have more diverse leadership of football, then that in turn helps to build some more confidence for people applying for the jobs.”

Mann said that former black players are demotivated to attain the necessary coaching requirements because of a lack of opportunities. These frustrations have been expressed by former England strikers Andy Cole, and, most recently, Jermaine Defoe.

“Defoe, in an interview on ‘Sky Sports’, said, ‘Why would I bother get my coaching qualifications if I’m not going to get a job? Because I am looking at people that have come before me and they are not getting the job, so why would I even bother to get qualified?’”

Sterling, during his interview, compared the fortunes of former England internationals Steven Gerrard and Frank Lampard, saying that, while they have landed top positions at Rangers FC in Scotland, and Chelsea in the EPL, respectively, in their early coaching careers, black former players with similar qualifications have not been given that chance at the same level.

“There’s Steven Gerrard, your Frank Lampards. You have your Sol Campbells and you have your Ashley Coles,” Mann said. “All had great careers, all played for England. At the same time, they’ve all respectfully done their coaching badges to coach at the highest level, and the two that haven’t been given the right opportunities are the two black former players [Campbell and Cole].”

Mann says fixing the problem at the board level will give black coaches a level playing field.

“If the [board’s] vision is we need to be a diverse business to work better, then actually it becomes more inclusive,” he said. “We get a different culture, we have more faith in the system to give us a proper equal opportunity, and that is what will happen for managers as part of the football industry.