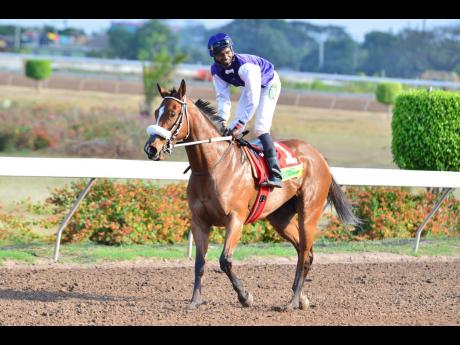 ENGLAND’S ROSE ripped 1:12.2 at exercise last Friday morning and will race with a tongue tie for the first time this afternoon when she takes on the gelding, MAHOGANY, who is as classy as they come but faces a blitzkrieg of speed from the filly at five and a half furlongs.

Wayne DaCosta’s ENGLAND’S ROSE, a full sister to retired champion, two-time Horse of the Year, SHE’S A MANEATER, reported off a five-month lay-up on February 22 and flew away from rivals on her three-year-old debut to clock 1:12.0 for six furlongs, posting splits of 22.2 and 45.2, winning by almost nine lengths.

MAHOGANY has been unbeaten in three races since gelded, bettering himself on each occasion and shaping up for a war with top colt WOW WOW in the 2000 Guineas. However, the Sensational Slam-Mete-orite offspring has never faced the blitz and flair of ENGLAND’S ROSE, whose only loss in four starts was suffered at the feet of WOW WOW last September.

Running as a 1-9 favourite after flooring WOW WOW on their two-year-old debut at three furlongs straight, ENGLAND’S ROSE led to the top of the lane in their rematch at five and a half furlongs in the Bearings and Accessories Trophy but found nil when the colt came calling.

ENGLAND’S ROSE’s disappointing loss led to her missing the remainder of the two-year-old season, which WOW WOW swept to establish himself as the winter-book favourite for this season’s classics.

At that time, MAHOGANY had just started to establish himself, gelded and fitted with blinkers after two losses. He romped home by 14 lengths at five and a half furlongs on December 28 and returned with improved performances as a three-year-old, brushing aside Jamaica Two-Year-Old Stakes runner-up, TOMOHAWK, at seven furlongs before stunning a pair of foreigners, SIR ALTON and UNCLE POLLY, at seven and a half.

ENGLAND’S ROSE and MAHOGANY should have started in the seven-furlong Thornbird and Prince Consort Stakes, respectively, but the March 22 racemeet was called off as part of a national effort to contain the spread of the coronavirus.

Returning in restricted-stakes company, the three-year-old stars have nothing fear against older horses, both having shown undisputed class as they prep for the one-mile 1000 and 2000 Guineas classics, which have been rescheduled for July 25 and 26, respectively.

MAHOGANY is sheer class but ENGLAND’S ROSE has terrifying speed, represented by splits of 22.4, 34.0, 45.2 and 57.2, which she posted without having a run in five months. As talented as he may be, MAHOGANY, with 119lb and leaving from the one-hole, will be surrounded by a horde of speed horses rushing into the half-mile, a charge which will be led by ENGLAND’S ROSE and another zippy filly, SHE’S A HIT.

ENGLAND’S ROSE is carrying a featherweight 115lb by her standards. Running the lightest she has ever been in her career, ENGLAND’S ROSE not only has the handicaps in her favour but also the draw, breaking from post-position seven.