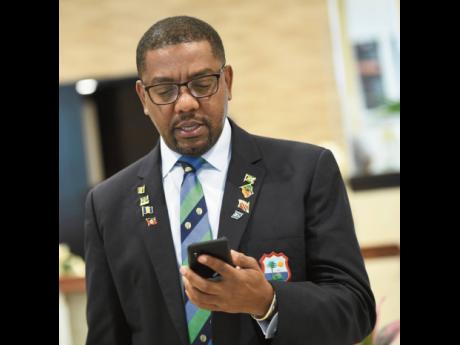 Cricket West Indies (CWI) is expected, this Saturday, to decide whether or not it will support former president Dave Cameron’s bid to become chairman of the International Cricket Council (ICC).

CWI’s Chief Executive Officer, Johnny Grave, is expecting a decision to made during this Saturday’s annual general meeting, which will be conducted online.

Cameron was recommended for the ICC chairman post by United States Cricket Hall Of Fame, and if successfully nominated, the Jamaican will go up against former Indian skipper and current president of the Board of Control For Cricket in India, Sourav Ganguly, as well as favourite, England and Wales cricket boss, Colin Graves, for the top job in global cricket.

Speaking during a Caribbean Broadcasting Union (CBU) online seminar yesterday, Grave acknowledged that the regional board has received official word from Cameron of his intention to challenge for the ICC chairmanship.

“There was a formal request from the former president (Cameron) to our board of directors. We haven’t had a meeting yet, obviously there isn’t one scheduled until we have our AGM, which has been scheduled to be held electronically and remotely this Saturday,” said Grave.

“The ICC is meeting later this week to discuss and agree the process for the election. So the first thing is for the ICC board to determine how they will select the chairman. From there it will go through the (CWI) board of directors and the president to consider this application from the former president to be nominated to the ICC vote,” Grave added.

Meanwhile, Grave added that CWI is hoping to receive financial assistance from the ICC, in line with what FIFA has done for football with a US$1.5 billion COVID-19 relief fund to be distributed to member associations.

“The ICC hasn’t made any emergency funding available for full or associate members. They are doing some analysis for all our cash flow projections for the next six to 12 months. But at the moment, we haven’t received any emergency funding. We are hoping and expecting the continued members’ distribution, which comes January and July each year, that will still flow as expected. In the short term, our July distribution, we are expecting in full and that will go some way in alleviating some of our cash flow challenges,” Grave pointed out.

“But it (relief fund) is something we need to consider. We have to take a collective view around the ICC’s ability to make emergency funding available. It is being discussed and at the moment we are hoping to get clarity at the next tournament, which is the men’s World Cup, in October - November in Australia, which is likely to be postponed.

However, the implication of that postponement is that TV companies and sponsorship companies will make their payment to ICC. But it is the impact of cash flows and financing any shortfalls that would be carefully considered, not just by ICC, but by all full members, because we are all navigating through what is difficult, challenging and delicate matters,” added Grave.