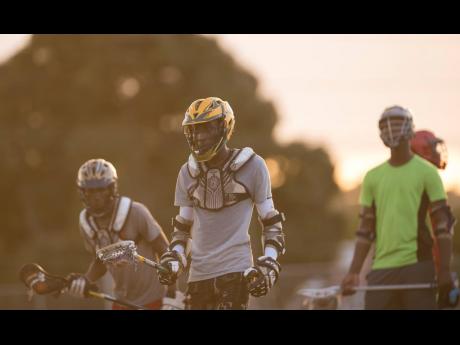 File
Nathanel Moulton (centre) and other members of Jamaica College’s lacrosse team go through a training session at the Jamaica College Ashenheim Stadium on January 16, 2020.

President of the Jamaica Lacrosse Association (JLA), Calbert Hutchinson, is sympathising with Jamaica College (JC), after the association’s decision to cancel the high school season and hand the title to Kingston College (KC) by virtue of their better statistics.

Kingston College and Jamaica College were set to meet in the decider; however, the coronavirus pandemic forced the postponement of the final, and after the lengthy delay, the association decided to call the season quits and hand the title to the Purples based on their superior run of form over the season.

Hutchinson, however, says he clearly understands why Jamaica College, who have challenged the decision, would feel a bit of injustice. Nevertheless, he insists the JLA made an informed decision and will stand by their ruling.

“I understand and empathise with Jamaica College. If I was in their position, I would want to challenge for the first place because they really worked hard. But it was an informed decision. We sought advice from Fiona Clarke, the competition’s director from World Lacrosse, and Dr Catherine Lowe, general secretary for the Pan American Lacrosse Association. So we carried out our due diligence. We consulted board members and regional and international competitions’ personnel and made an informed decision as it relates to allocating the places based on statistics,” said Hutchinson.

“The entire board stands by the decision, and next time, I am pretty sure JC will get that equal chance to come out on top. We are very impressed with the level of improvement at Jamaica College. They did a fantastic job, but we couldn’t make an emotional decision regarding the placement, it had to be data driven,” he added. “The statistics don’t lie and Kingston College were the superior team based on overall record. They didn’t lose a game, their score margins were significant and they maintained an outstanding record over the season.”

Some supporters argue that with only the final game remaining, the organisers could have found a way to have the match played, but Hutchinson said under the current COVID-19 climate, that was too risky.

“Because of the restrictions, it was virtually impossible to continue with the league. We rely heavily on schools and the use of their premises, and it’s virtually impossible to continue. So we met with our board and discussed all the factors and the board decided not to continue to the league,” said Hutchinson. “There is a question of liability considering the present circumstances with the coronavirus and the possibility of it spreading. The Government decided to open up the borders for returning residents and visitors, and we didn’t want to take on that responsibility if something breaks out. We took into account the well-being of our players, spectators and other stakeholders and that is too much of a risk.”

However, he believes, like many other organisations, the coronavirus pandemic has been a great learning experience for them, and they hope to put things in place to address circumstances like these in the future.

“There is no specific section in our rule book that speaks to this, because it is unprecedented times, but I am pretty sure that at the next annual general meeting with World Lacrosse, we are going to be looking to put some clauses into our rule book that take into account events like these.”