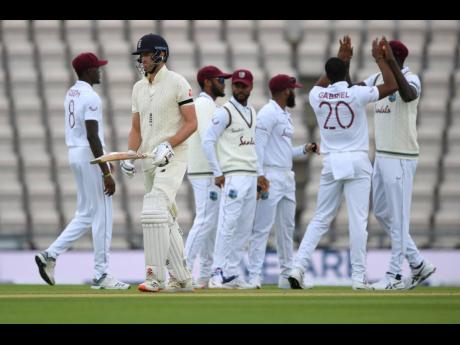 AP
England’s Dom Sibley (second left) leaves the field after being dismissed by West Indies’ Shannon Gabriel (second right) during the first day of the first cricket Test match between England and West Indies, at the Ageas Bowl in Southampton, England, yesterday.

Only 82 minutes and 17.4 overs were possible as rain wrecked the opening day of the first Test of the historic ‘bio-secure’ series at Ageas Bowl yesterday, ruining high expectations after weeks of anticipation.

With the COVID-19 pandemic and global race protests providing the ideal stage for the series, players frustratingly spent most of the day trudging on and off the field on England’s south coast, as the unpredictable weather played havoc forcing three rain interruptions.

Perhaps the only highlight of an otherwise humdrum day was when speedster Shannon Gabriel forced opener, Dom Sibley, to shoulder arms in a moment of horrific misjudgement, spectacularly hitting his off-stump in the second over without a run on the board.

After that, left-handed opener Rory Burns plodded around for an unbeaten 20, while Joe Denly finished on 14 not out as England reached 35 without further loss before the last rain break at 4:27 p.m. (10:27 a.m. Jamaica time) forced players from the field for the final time.

Assistant coach Roddy Estwick said afterwards that West Indies had not exploited their time in the field as best as they could have.

Persistent drizzles had wiped out the first session, delaying the toss until 1:30 p.m. before play got underway at 2 p.m., with both West Indies and England players taking the knee in a show of support for the Black Lives Matter movement.

With one hand cloaked in a black glove, the Windies players knelt for 30 seconds along with their English counterparts, invoking a pensive mood over the proceedings.

And Gabriel wasted little time in making the early breakthrough for West Indies in his first Test in 10 months when he brought one back to hit Sibley’s off-stump. Only another over was possible before the rain arrived with England on one for one and when the restart came nearly a half-hour later, only seven balls were possible before the adverse weather drove players from the field again.

Though the break lasted 40 minutes, Burns and Denly appeared unfazed by the interruption, remaining compact, while also cashing in with boundaries off both Gabriel and seamer Alzarri Joseph.