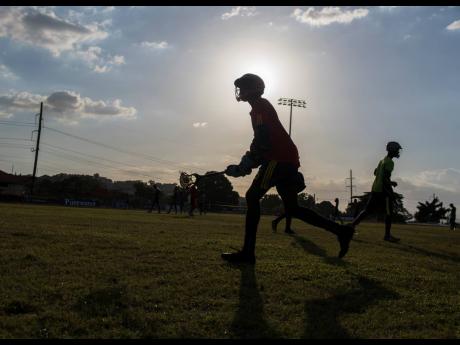 Gladstone Taylor
Members of the Jamaica College (JC) lacrosse team training at the Jamaica College Ashenheim Stadium earlier this year. JC are appealing a decision by the Jamaica Lacrosse Association to hand the high school title to fellow finalists Kingston College after the final was cancelled due to the COVID-19 pandemic.

However, JLA President Calbert Hutchinson insists they went through all the proper channels to arrive at their decision and will not be changing their ruling.

Kingston College and Jamaica College were scheduled to meet in the JLA High School Championships decider, but the competition had to be called off due to the coronavirus pandemic. The JLA subsequently awarded the title to Kingston College based on their superior record throughout the season.

It is a decision that has not gone down well with the JC top brass, with Robinson describing the move as unjust, unprecedented and wrong. The principal further argued that with the season cancelled, no winner should have been declared, while also criticising the lack of an independent appeals process.

“It is unfair, unjust, not in the rules and unprecedented. We appealed and they (JLA) turned it down. But how can you appeal to the body that made the mistake? There is no system of appeal in the world where the people that made the error are the people you appeal to. There must be a different appeal body. So I am questioning the process of appeal and the decision,” he told The Sunday Gleaner.

Robinson also dismissed the association’s point that they sought the advice of international bodies.

“We don’t want to be named any co-winners. The competition was cancelled. That’s what we were told and that was what was written to us. So once you cancel a competition, how can you name a winner and a final wasn’t played? There was no rule that says you can do that, here (locally) or internationally. So our position is very clear,” he stated.

“ISSA don’t control lacrosse. However, they made it clear their rules state that once a competition is cancelled there can be no winner. Headley Cup (rural cricket competition) ended the same, with the final not being played. So I am asking the lacrosse body to reconsider and lean on other sports administration with more experience.

“They gave the impression they got the go-ahead from the international lacrosse body, but I want to find out if they (international bodies) really gave them that advice, because nobody could give that advice. It is wrong,” he added.

Meanwhile, Hutchinson contends that the association did not cancel the season, only the final, and said the JLA has no intention of retracting its decision.

“The season was played but we could not get to play the final because of the COVID-19 restrictions. The word ‘cancel’ was used in reference to the final, so the season was valid, it’s just the final that was cancelled,” he explained.

“The decision was made without any ill-intent or bias. We sought advice not only from our board but from the regional body, the Pan American Lacrosse Association and the world body through director of competitions, Fiona Clarke, and we are convinced we made the right decision and we stick by it,” Hutchinson said.