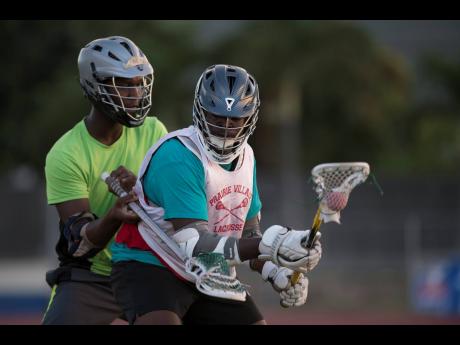 File
Raheem Pusey (right) goes on the offensive while being marked by Matthew McLeod during a Jamaica College lacrosse team training session at Jamaica College Ashenheim Stadium on Thursday January 16, 2020.

The Jamaica Lacrosse Association (JLA) board was set to meet yesterday to review its decision to hand the 2020 high-school title to Kingston College (KC) over Jamaica College, based on statistics, after the final was cancelled due to the coronavirus outbreak.

Hutchinson, who has repeatedly stated that the association would stick to its decision, described the meeting with Robinson and Samuda as a productive session.

“It was a successful meeting. All parties were on the same page, and I await a final decision from my board now. So it’s before the board ... it’s not for me to say. So as soon as they meet, they will decide. But I don’t know what they will collectively decide,” Hutchinson stated ahead of yesterday’s meeting.

Robinson, who swore to fight the ruling from the outset, agreed that the meeting was a good one and was hopeful that the governing body would change its decision to hand the title to KC.

“The meeting was a very clear and frank discussion. All parties aired their concerns. Everybody listened. We all got a chance to speak clearly about what we thought, and everybody’s position was considered, and we await any consideration,” said Robinson.

Samuda, who mediated the teleconference, was also pleased with the meeting and anticipates an outcome that will benefit the sport.

“We always want to know if there is consensus and unanimity at the table. We discussed the decision that was made in respect of the league by the lacrosse board. So far, it (meeting) has gone well. We will meet again, and I suspect both parties are very keen to have an amicable resolve of the matter,” Samuda said.