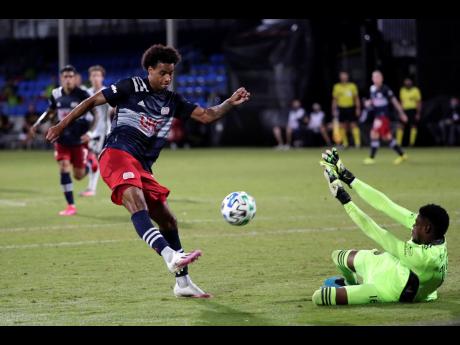 AP
Philadelphia Union goalkeeper Andre Blake (right) makes a save as New England Revolution forward Tajon Buchanan shoots on goal during the first half of an MLS match in Kissimmee, Florida, on Saturday, July 25.

Goalkeeper Andre Blake, who helped the Philadelphia Union into the semi-finals of Major League Soccer last Tuesday, said that it has been tough living in a biosecure bubble for nearly a month. However, the opportunity to help the Union claim their first MLS Cup has been a great motivation for him and his teammates.

Blake, who has conceded only three goals in five matches since the start of the MLS is Back tournament, continued his solid form as the Union defeated Sporting Kansas City 3-1 in their quarter-final game, and he says they have what it takes to win their first MLS Cup.

However, he says that being away from his family for more than three weeks under strict safety protocols and health guidelines has not been easy.

“You have the MLS is Back tournament, where they bring all 26 teams to Florida into a [biosecure] bubble, and it has been very tough,” Blake said. “Asking us to leave our families for a minimum three weeks has not been easy; it has definitely been hard on us.

“We have been here for 29 days, and we have to be practising social distancing and follow health protocols as much as possible and just holding out. But it is what it is, and that is a part of what sports is like now.”

After helping the Union into the semi-finals, where they’ll meet Portland Timbers, Blake said that the group has been re-energised and that they believe they have the ability to go on and win the championship for the first time in their 10-year history.

“The tournament is down to the last eight, and we are here to do our jobs, and there are only two more games to go,” he said. “We are now into the semi-finals, and I am happy with where we are at, but we have to keep pushing and trying to get better.

“We are now waiting to see who we play in our next game on Wednesday, and although we know there is still room for improvement, we think we can go all the way and win the whole thing.”

The 2016 MLS Goalkeeper of the Year and 2017 Gold Cup Golden Glove winner for Jamaica is also very pleased with the form he has been in this season but says it’s no time to rest on his laurels.

“I have done pretty well,” he said. “I feel pretty good. I have been having a pretty solid tournament, and that’s important. Whenever I can do my job effectively to help the team is very important. But there is no room for complacency.”