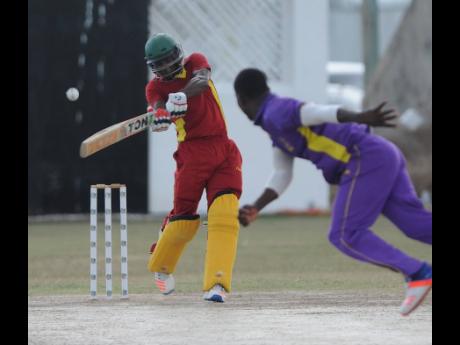 File
Oraine Williams from St Catherine Cricket Club plays a shot during his innings of 126 runs not out in the final of the Jamaica Cricket Association’s all- island 50 overs competition against Kingston Cricket Club at Chedwin Park in 2017.

Melbourne Cricket Club President Mark Neita agrees with cricket economist Tim Wigmore that clubs in the region should be better compensated for their role in developing world-class players.

Wigmore, in a recent television interview, said regional clubs don’t get adequate remuneration for grassroots development and that more money should come to those clubs in order for them to keep turning out these players.

“He is saying clubs and parishes must be compensated in order to continue to develop more cricketers. I want to shake his hand. I couldn’t agree with the gentleman more,” Neita said.

“Development of players start in clubs and parishes, and they have neglected the years, the thousands of dollars and man-hours that went into creating players like (Andre) Russell and Chris Gayle, Oshane Thomas and the Samuels brothers (Robert and Marlon),” Neita stated.

Cricket West Indies (CWI) receives 10 per cent of players’ retainer fees from the various leagues players participate in around the world, which is shared equally between the CWI, the national association and clubs.

However, Neita complained that it usually takes years for them to get their share and that very little comes from their players participating in international cricket.

“The only time we get money is when the players play IPL [Indian Premier League] and those tournaments and it (compensation) takes two and three years. When they play for the West Indies, it’s three and four years before it gets to the clubs, and even then it is just a small amount,” he continued.

He added that money at the top must trickle down more substantially for clubs to produce even more players.

“We need the resources to continue to develop and produce players and until we understand that, we are going to be in this position,” Neita added.

“At the first-class level, players get US$1,600 (approximately $235,000) per match, a percentage of that should go back to the clubs, and the same thing should apply for Test matches.

“It will help, because you will not find a significant amount of clubs having people at that level (IPL). So clubs like St Catherine CC, Melbourne and Lucas benefit, but that is about three clubs out of 20 clubs, so the formula should also be used when you play first-class cricket,” he reasoned.

Johnny Grave, CWI CEO, agrees that clubs are the bedrock and foundation of regional cricket and that they deserve more support.

“We have to get cricket at the local level back up. We can invest more in terms of giving more money to regional boards to organise local regional club cricket.

“When we restart cricket, we should restart it at that level and build it back up. It gives us a chance to re-evaluate and invest in the foundation of club cricket before we contemplate regional cricket and, ultimately, international cricket,” Grave said.