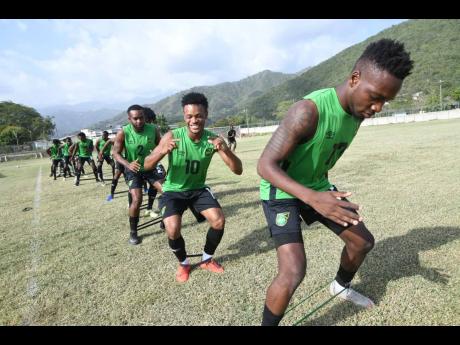 File
Members of Jamaica’s national senior football team, the Reggae Boyz, are taken through a stretching exercise during a training session at The University of West Indies (UWI)/Jamaica Football Federation/Captain Burrell Centre of Excellence at UWI on Tuesday, August 27, 2019.

Reggae Boyz team manager Roy Simpson says he has formulated a plan that will ensure the best local talent not only get the opportunity, but also the experience needed to compete with overseas-based professionals for places in future national teams.

Simpson says this plan will consistently turn out quality local professionals and a competitive local-based national squad, but added that it will need the support of all stakeholders.

The idea is to select a local group of elite players, have them in camps year round, and only release them to clubs on a minimum. These player will be privileged to top-class technical and tactical training methods, conditioning, medical treatment as well as compensation, and will be kept under close monitoring by the federation. They will also go on internationals camps and play multiple games before returning home.

“We believe that if our confederation is hosting World Cup 2026, with Jamaica being a dominant force in the confed, we must be at that World Cup and whatever we are doing now must feed into that plan,” Simpson told The Sunday Gleaner.

The programme, he explained, is mirrored off Rene Simoes’ adopt-a-player programme, which was figural during the successful World Cup 1998 campaign, where local companies adopted individual players, who would in turn be brand ambassadors for the respective organisation.

During that time, Simoes also had a strong core of local players in camp that would travel to Brazil frequently for camps and games, and Simpson believes that upgrading that model and implementing it would result in enormous benefits for the players, the national team and the clubs.

“Players must see that becoming a Reggae Boy can solve his financial problems, break down barriers and open doors. When a team qualifies for the World Cup, FIFA gives his club money. FIFA asks about the involvement of each player and their club and there’s a payment from FIFA’s purse directly to clubs.

“When the national team takes a player, his club will be in a league of exposure, and this will bring a level of attention to the club and the possibilities of transfers. So clubs stand to benefit a lot,” Simpson noted.

He added that going on international camps and playing high-quality games during the FIFA windows would improve the local core immensely.

“Players will go to camp in Europe, South America, Mexico and play teams there. We will have this group of players permanently in camp, permanently playing and training together and preparing for the next international games or competition, to the point where our international players will have to come good because this team is unbeatable,” he said.

He anticipates that some clubs might be a bit apprehensive about releasing players for such long periods, but he is convinced that if the Jamaica Football Federation (JFF) can develop an understanding with the clubs, they will give it their full support.

“It’s not about us talking down to clubs and taking away their players. We will meet them halfway, as clubs have to be in sync with what he (player) is doing with us. So an elite player will play for his club, but training will be limited because an elite player don’t need to be training at his club every day, because what he really needs is international exposure and experience,” Simpson said.

Nevertheless, Harbour View’s General Manager Clyde Jureidini, dismissed the idea, describing the ‘Simoes model’ as outdated, while warning that the federation will not be allowed to take their players.

“You cannot take people out of their clubs. That was something that was allowed for Simoes, Captain (Horace) Burrell and the group (players) to get away with, because it was a new dawn 25 years ago, but that story is old and told,” Jureidini assessed.

He added that the development of players lay primarily with the clubs, however, he agreed that clubs should continue working with the federation to improve the local elite group.