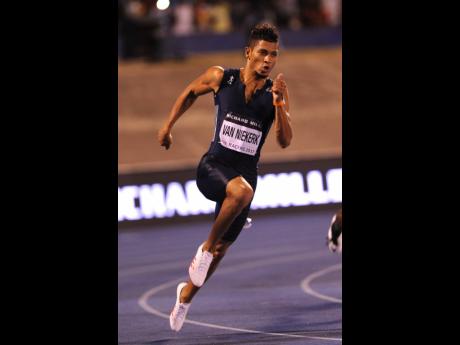 File
South Africa’s Wayde van Niekerk in action in the men’s 200m sprint at the 2017 Racers Grand Prix meet at the National Stadium in Kingston.

South Africa’s men’s 400m world record holder Wayde van Niekerk says he is looking forward to competing in Jamaica again. Van Niekerk last competed at the 2017 staging of the Racers Grand Prix (GP), on the same night when his friend, Usain Bolt, had his last-ever race on Jamaican soil. But a lengthy injury lay-off and the meet being cancelled this year because of the COVID-19 pandemic meant he has not returned to the National Stadium for the event. He, however, looks back in fondness at his last time on the National Stadium track.

“If I remember correctly, I believe I’ve been to Jamaica twice, competed there twice as well,” van Niekerk told The Gleaner. “I see Jamaica as a lot like home. The fans that we have here at home, and the way people cheer and interact with us sportspeople is a lot like at home.

“The crowd was amazing. Until today, it’s one of the best that I’ve experienced.

“The entire country has somewhat created a legacy in the sport. The history of Jamaican sprinting is amazing, and just being there was a massive honour.”

One of the reasons for his fondness of Jamaica is that he set his personal best time of 19.84 seconds in the men’s 200m during the GP.

“I believe that it played a massive role in me performing my personal best in the 200m that day and, obviously, the quality of sprinting that Jamaica has produced also somewhat helps switch you on and pushes you to try get the best out of yourself,” he said. “When you get there, you wanna perform, you wanna do great, and that’s why I appreciate it.”

Should the pandemic end soon and the GP return, van Niekerk says it is certain to see him taking part again.

“It has been kind of a ‘must go to’ on my schedule,” he said. “For me, it’s always a pleasure to be able to come to Jamaica and enjoy the experience. It’s definitely one of the stadiums that I’d love to come back to, and compete at again.”