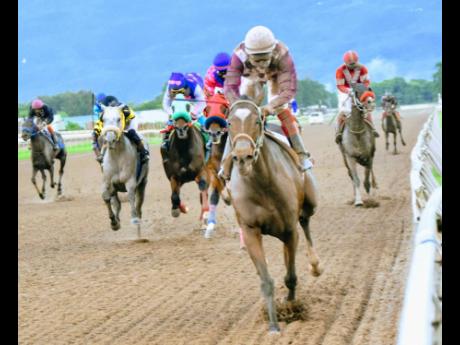 With the horse racing population at Caymanas Park falling considerably short of desired levels, a number of industry insiders are continuing their calls to Government for an urgent removal of all taxes associated with the importation of horses into the island.

Solomon Sharpe, chairman of Supreme Ventures Racing and Entertainment (SVREL), pointed to a significant decrease in the number of horses that have been brought into the island over the past few years, noting its negative impact on the promoter’s efforts to grow the sport in the country.

“We want it to be totally duty free on all imported horses for the racing industry,” said Sharpe, who shared that there are currently approximately 1,100 horses at Caymanas Park. “In the short term, we need to have about 1,500 horses and, in the long term, we need to double up those numbers to get to 3,000.”

“We have the plan and facility to house those horses, and then we will reshape the whole racing calendar to fit that,” Sharpe added.

He underscored that the racing industry stands to lose millions of dollars if the Government does not act swiftly.

“The economics of Caymanas Park is that we are not running enough races, and so, for the industry to strive and the entire horse racing industry in Jamaica to be profitable, then we need more races,” said Sharpe. “Caymanas Park is the central focus of horse racing, and so, if the Government allows the importation to be more relaxed, then the owners will bring in more horses.”

Clovis Metcalfe, chairman of the Jamaica Racing Commission (JRC), says he has been, for a number of years, lobbying the Government to waive the tax, pointing out that such a move would lead to wide-ranging benefits.

“It would be a win-win position for the Government, owners and investors if these charges are waived,” said Metcalfe. “Such action would lead to an increase in the local inventory of race horses, which is woefully needed at this time for competitive and attractive racing.”

“The final analysis would lead to increased sales in the tote and, by extension, increases in tax revenue to the Government, which would easily outstrip the reduction in taxation by the waiver,” he added.

Metcalfe, who is one of the founders of Ham Stables Farm, noted the stud farms have been producing less horses over the years because of their inability to import quality mares and stallions into the country.

“In fact, in previous years, we used to have about 250 folds coming to Yearling Sale, but, in the last sale in November, we only had 66,” he said.

Trainer and breeder Ian Parsard, who has imported over 14 horses in the last five years, is also in support of a removal of the importation tax.

“I support this call because I had done a five-point plan for moving the industry forward in a major way, and this was one of the important items,” said Parsard. “This is an additional cost that, if we don’t have, then it will certainly encourage more people to invest in more overseas horses and get better quality.”