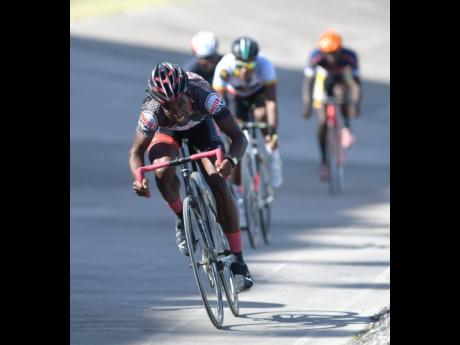 File
Oshane Williams wins the Elite One and Two tempo race at the Jamaica Cycling Federation Development Meet One held at the National Stadium on Sunday, February 11, 2018.

Jamaica Cycling Federation (JCF) President Wayne Palmer expects the Ministry of Health and Wellness (MOHW) to approve protocols for cycling to return locally by the end of this week.

Palmer says that cycling is a contact-free sport and was also declared by the World Health Organization (WHO) as a low-risk sport in the COVID-19 pandemic, but he said that the delay in approval from the MOHW has hampered the JCF’s ability to make progress.

“The first thing we want to do is get an approved COVID protocol to allow the return of the sport,” Palmer said. “We have sent in our document to the Ministry of Sport, and it is now with the Ministry of Health, so we are waiting on a response from them that will officially allow us to start racing again.

“Cycling is not a contact sport, and it is identified by the WHO as a low-risk sport, so we don’t anticipate that it will take a very long time. I am hoping that we will get it by the end of this week.”

Palmer said that the protocols were submitted to the Ministry of Sport three weeks ago, and it revised the document before sending it back to the JCF for adjustment. He said that after the document was amended, it was then sent to the MOHW.

He said that it is important to get the approval for local riders to begin preparations for the Pan American Games in March.

“We are now preparing for the Pan American Championship, so we need that protocol to get back to training and racing at the Stadium and on the road,” he said.

“On recommendation from the Ministry of Health, we have advised our athletes that they can train and prepare for the event as long as they are following the health protocols, and we have had a lot of positives from it.

“So we managed to get our athletes to train even though there is no formal racing, but as long as we don’t have a protocol approved, we cannot advance as much as we would like.

“Some athletes have fallen off in their fitness and performance levels because athletes have to compete in order to stay sharp. So the lack of competition has been a major hit we have taken, but we are hoping to remedy that by the end of this week.”