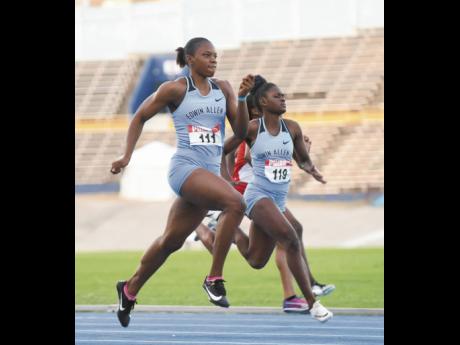 Former Edwin Allen High School standout Kevona Davis completed her first collegiate run, finishing second overall in the 200m at the Wooo Pig Classic at the Randall Tyson Track on the campus of the University of Arkansas on Friday.

Davis, the World Under-20 leader in the half-lap event last year with 22.86 seconds, was pleased with her effort following disappointment the previous week, when she was disqualified for a false start in the 60 metres event at the Corky Classics at Texas Technical University, spoiling her debut.

“The false start brought back memories of Class Three and I was a bit shaken up and disappointed to know that it was my first meet of the season and I did not get to perform,” Davis told The Sunday Gleaner.

She was, however, happy with her reaction this week, noting that she was able to come back quickly and put that disappointment behind her going into her 200m run.

“I came back this weekend, however, to execute and dominate, and despite not winning overall, I feel great for second,” Davis continued.

NOT FOR THE SWIFT

“The race is not for the swift but who can endure to the end. Hats off to my coach for believing in me and all those who have supported me so far,” she added.

At the same meet, there was also success for 2018 IAAF World Under-18 110m hurdles champion Damion Thomas, while former Queen’s High sprint hurdler Dazay Freeman just missed out on a top-three finish in her event.

Competing for Louisiana State University, Thomas won the men’s 60m hurdles in 7.71 seconds to get the better of hometown boy, Carl Elliot, who was second in 7.87 seconds.

Freeman, who was competing at home, ended fourth in the women’s 60m hurdles in 8.27 seconds, as the University of Texas’ Chanell Brissett won impressively in 8.07 seconds.