It’s good to be back - JAAA, athletes welcome return of competitive athletics 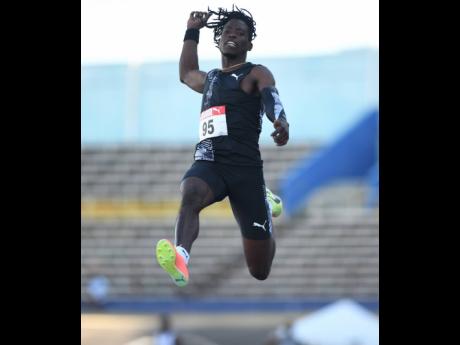 The island’s track and field athletes finally got a chance to return to the track yesterday, as competition returned with several Jamaica Athletics Administrative Association (JAAA) Qualification meets across the island, under strict COVID-19...

The island’s track and field athletes finally got a chance to return to the track yesterday, as competition returned with several Jamaica Athletics Administrative Association (JAAA) Qualification meets across the island, under strict COVID-19 safety standards.

Senior athletes got the chance to compete, for the first time, on a recently resurfaced track at the National Stadium and, despite heavy headwinds negatively affecting performances all afternoon, president of the JAAA, Garth Gayle, welcomed the return of competitive track and field in the island.

“We at the JAAA are very pleased for the return of track and field and all the meets today (yesterday) were a success,” Gayle said.

“The team has worked very hard to ensure that there was compliance at all events, that all protocols were in place and that all the meets finished on time,” Gayle continued.

Protocols included the constant sanitisation of implements and equipment such as starting blocks, while athletes had to adhere to strict safety standards throughout the meets.

“This is an Olympic year and it is a new track and we want them to compete here, and I am very confident that their performances will get better each week,” added Gayle, in underlining the importance of the senior athletes making the most of the opportunities being provided to compete at the island’s prime facility.

Despite looking a bit rusty after the lengthy lay-off, there were some fair results on the track, with Racers Track Club’s Zharnel Hughes leading the way in the Men’s 100m.

In the final heat of the event, Hughes rallied after a poor start to get the better of his rivals, winning in 10.37 seconds, finishing ahead of G.C. Foster College’s Oshane Bailey, 10.39 seconds, and his Racers training partner Oblique Seville, who was third in 10.41 seconds, against a -3.5mps wind reading.

In the Men’s 200m event, headline athlete Yohan Blake had to settle for third in 21.72 seconds. Veteran sprinter Nesta Carter of MVP won the event in 21.48 seconds, with Kadrian Goldson of G.C. Foster College finishing second in 21.58 seconds.

Carter was happy with the opportunity to compete and encouraged his co-workers to ensure that all the safety measures are respected.

“We must give the credit to the [Government] for allowing this event to go on, so we have to observe the protocols and abide by them. After not competing for almost a year, it felt good to be back. I am not a big fan of the 200m, but we have to get these runs in so we can prepare as best as possible for the Olympics later on this year,” said Carter, who also reported satisfaction with his level of preparation at this point.

Roneisha McGregor looked good on her way to winning the Women’s 400m in 52.28 seconds as Christine Day of Cameron Blazers ended second in 52.99 seconds, with third going to Anthonique Strachan of MVP in 53.55 seconds.

Sade Williams of MVP was best in the Women’s 200m in 23.22 seconds as Stephenie-Ann McPherson took second in 23.56 seconds ahead of UWI’s Candice McLeod, 23.79 seconds.